Before looking into application server and its architechture we just check where an ABAP program lies in the whole process.
Let's see the simple figure to under stand the linkage of sata base,presentation and application servers : 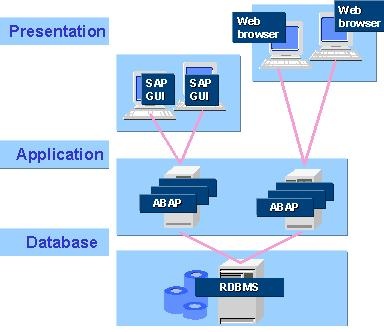 ABAP applications are written in the ABAP programming language, and run within the application layer of the SAP Web Application Server.

ABAP programs communicate with the database management system of the central relational database (RDBMS) and with the presentation layer. A SAP-specific graphical user interface (SAP GUI) for users logged on to a SAP System and Web browsers for Web-based applications are available to you as presentation layers.

The Application Server ABAP (AS ABAP) allows you to program applications in ABAP. It provides the ABAP runtime environment (a virtual machine for ABAP programs), the ABAP Workbench, and an integrated change and transport system (CTS).

AS ABAP can be used either by people using user interfaces (Web Browsers or SAP GUI) or by other software components through the network. For sap gui two main protocols are used: HTTP/HTTPS/SMTP for Internet connections (controlled by the so-called Internet Communication Manager, ICM) and SAP's own Remote Function Call (RFC) protocol (via the RFC interface).

Most of the components of AS ABAP can be divided into three layers:

Presentation Layer :
These components are responsible for the presentation of data for users and the receiving of user entries. When web browsers are used as user interfaces, HTML pages prepared in the presentation layer are accessed by application programs through the classes and interfaces of the Internet Connection Framework (ICF), which wrap the HTML pages. The presentation in a web browser is based on Web Dynpro ABAP (MVC-based technology for creating platform-independent web-based interfaces) and also still Business Server Pages (BSP, HTML pages that incorporate server-side scripts written directly in ABAP). When you use the SAP GUI that is available in versions for MS Windows, Java and Web Browser, user interfaces are displayed in windows that are based on the (classical) dynpro technology. The layout of a dynpro can contain a set of predefined screen elements or GUI controls (wrapped by the classes of a Control Framework, CFW).

Application Layer :
Here, application programs are executed. The application layer contains a kernel written primarily in C/C++ that serves as a platform for the application programs. The kernel of AS ABAP provides Virtual Machines for ABAP with ABAP Objects (main programming interface of AS ABAP for business applications), XSLT and ST (transformation languages for transforming ABAP data to XML and vice versa), and still JavaScript (obsolete, server-side scripting in BSPs beside ABAP).

Persistence Layer :
Here, persistent data is held in a database. The database is accessed by ABAP programs through the database interface of AS ABAP that is subdivided into an Open SQL interface and a native SQL interface. Open SQL is a subset of the Structured Query Language (SQL) realized directly by ABAP statements. Native SQL are database-specific SQL instructions that are passed directly to the database system (either statically or dynamically via ADBC).

we shall look into the structure of the ABAP-AS.

Ø  Structure of an ABAP Application Server

The following diagram shows the structure of an ABAP application server: 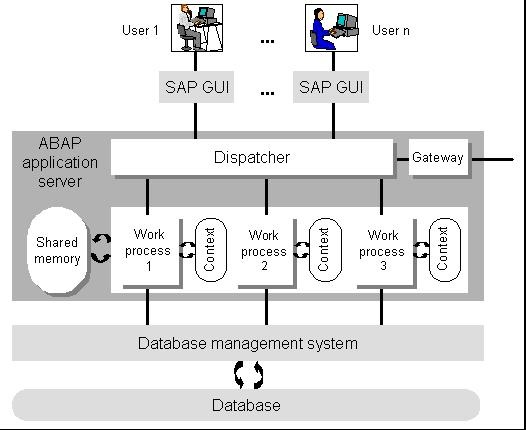 In addition to several work processes whose number and type are determined at the startup of NetWeaver AS ABAP, each ABAP application server contains a dispatcher, a gateway and the shared memory. The tasks of these components are briefly described in the following:

To link the work process and the users logged on the application server dispatcher is used.

The dispatcher is the link between the work processes and the users logged onto the ABAP application server (that is, the SAP GUIs of theseusers). Its task is to receive requests for dialog steps from the SAP GUI and direct them to a free work process. In the same way, it directs screen output resulting from the dialog step back to the appropriate user.

This is the interface for the communication protocols of NetWeaver AS ABAP (RFC, CPI/C). It can communicate with other ABAP application servers of the same NW AS, with other SAP Systems, or with external non-SAP systems.

All of the work processes on an ABAP application server use a common main memory area called shared memory to save contexts or to buffer constant data locally.

The resources that all work processes use (such as programs and table contents) are contained in shared memory. Memory management in the NetWeaver AS ABAP ensures that the work processes always address the correct context, that is the data relevant to the current state of the program that is running. A mapping process projects the required context for a dialog step from shared memory into the address of the relevant work process. This reduces the actual copying to a minimum.

Ø  Advantages of this Type of Architecture

The structure of the ABAP application servers described here supports the performance and scalability of NetWeaver AS ABAP. The fixed number of work processes and dispatching of dialog steps leads to optimal memory use, since it means that certain components and the memory areas of a work process are application-independent and reusable. The fact that the individual work processes work independently makes them suitable for a multi-processor architecture.