The security concept in BI is different from that of a transaction system (ECC). In BI, the roles and authorizations are governed by reports and the ability to authorize the characteristics and key figures in those reports among users. So an effective authorization model in BI should take into account the following key concepts:

This blog will describe a matrix type strategy to configure a security model for a BI system. This is useful to retool existing security concepts to leverage the new analysis authorizations.
The new BI Analysis Authorizations use authorization objects created via transaction RSECADMIN to control access to characteristics that are authorization relevant. Those objects can be assigned via roles to users or directly to user ids. For this model I recommend controlling everything using roles instead of direct user assignment.

The two main types of roles for a BI Security concept would be:-

The reporting roles will usually be sub divided based on the user access as super users and end users.

Super Users will have the following access:
1) Modify the Queries created by them.
2) Create, Change or Delete Workbooks under their corresponding roles.
3) Have access to all queries built under the Infoprovider assigned to them.

End User Access is follows:
1) Workbooks and Queries are display access only.
2) 'n' number of end user roles are created based on the number of queries accessible to end user groups.

Now let us consider an example to security model along these lines for two areas namely General Ledger(FI) and Inventory Management(IM). So the roles for this would be

Authorization Roles: For this model let us consider two authorization relevant organizational data characteristics for those areas (FI and IM) for sites 01 and 02.

Hence for each characteristic a total of three authorization objects are created.

COMPANY00 - Auth object for all companies

The Authorization object is created in RSECADMIN as shown in Figure. 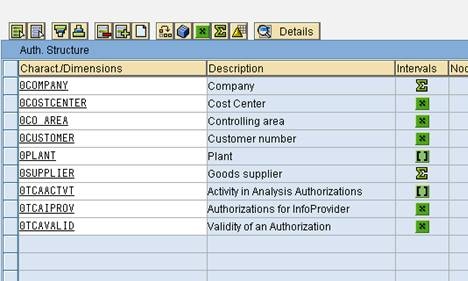 0COMPANY is given an aggregated authorization. This is done so as to allow access to run queries having 0COMPANY as a value even though user restriction is based on 0PLANT.

Other Authorization relevant characteristics are maintained at full authorization.

Similarly other authorization objects are created.  Each of the objects created is assigned to a role under object S_RS_AUTH.

The authorization roles will be as follows:

Role Matrix and User access:
The various types of users we may need to address are as follows:

User AS:   Is a super user running reports for both GL and IM.

User AE:   Is a end user running reports for both GL and IM.

User BS:   Is a super user running reports for GL only.

User BE:   Is a end user running reports for GL only.

User CS:   Is a super user running reports for IM only.

User CE:   Is a end user running reports for IM only.

The matrix for user to role assigment is now created with Auth.Roles in rows and Reporting Roles in columns as shown below: