In transaction RSD1 or Hana BW Modeling Tool, it is possible to define a key figure as type FLTP (Floating Point Number).

When you activate the object, a warning is raised:

This is an important warning(Message no. R7B136), please read the long text in details: 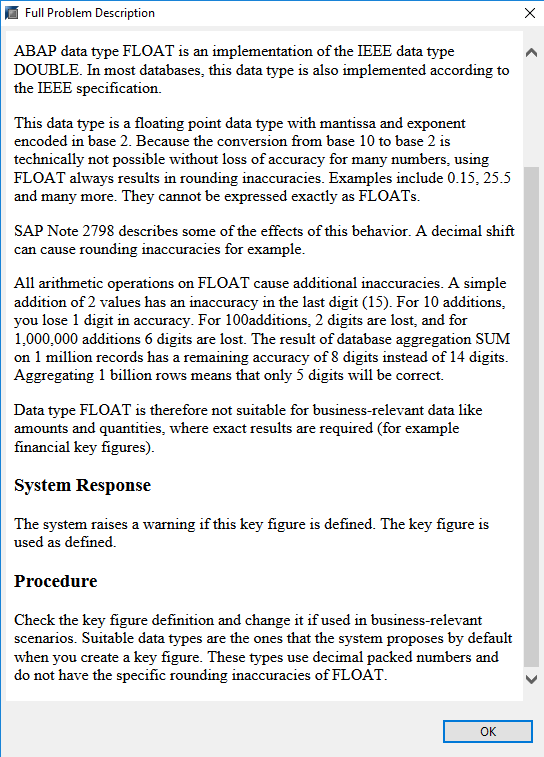 The Impact of FLTP

As explained in Float-point Algorithm, inaccuracies for float type are inevitable.

The impact in BW:
Many decimal numbers can't be exactly converted to binary numbers (the float type). When external (decimal) format is converted to the internal format (to base 2 and 16), the system generally already rounds the number. See details in Note 2798.
When a very big number is added a small number, further rounding can happen due to the limited digits (see Accuracy problems). In BW, after aggregate enough records of small numbers you will get a big number. Then further adding small numbers may cumulate to quite big deviations. In this case, the different sequence of aggregation will lead to different sum up results due to rounding problem. Also, parallel processing of data also means different aggregation sequence, which will lead to different rounding result.

In planning scenarios, this means:
The FLTP key figure can't be 100% reverse booking, very often some small key figure values that are not initial, such as -1.9876543209999999E-300, can result from reverse postings.
If a FLTP key figure is used as the reference of disaggregation, you will get extreme big value as the result. Because the norminator is a very small number, the value to be disaggregated is divided by this very small number and then allocated to each record.
As 100% reverse booking doesn't work, compress cube with zero elimination also doesn't work for a planning infoprovider

Disaggregation Overflows when refers to a FLTP Key Figure