A query with non-cumulative key figures displays negative stock values even so no negative movements have been posted to infoprovider.

This is usually due to one of the following reasons:

Example 1: wrong DTP extraction type 'Delta' for the Initialization of the marker/reference points (in most cases 2LIS_03_BX requests)

Assume, the DTP extraction mode for this initialization request is wrongly set to 'Delta':

If this is loaded with an DTP in 'Delta mode', the F-table looks like this:

After compression the E-table will contain a marker and a movement:

The movement record should not be there and will not be there, if the DTP extraction mode would have been 'Initial Non cumlative of Non-Cumulative Values'.

This will cause the query calculation to go wrong from now on for times before the initialization:

This request will be loaded to the F-table:

Now a compression without marker update will transfer these records into the E-table:

If your scenario has a stock initialization because only a part of the historic stock data will be loaded, make sure that the initialization of the markers is loaded with the correct DTP extraction mode: 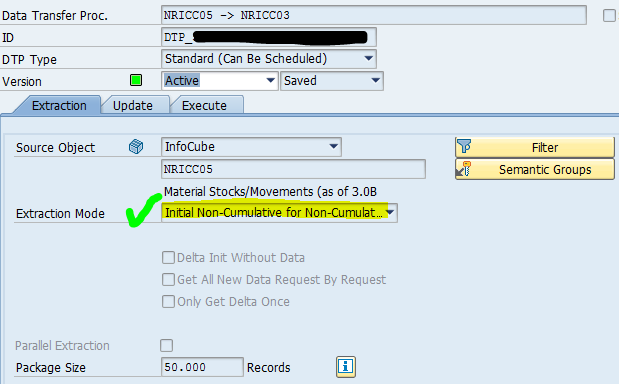