As discussed in Improving BW Query Performance by Pruning, pruning is also done regarding partitions defined for an ADSO (BW/4Hana). In the following simple example the query uses an corresponding filter which can be used for pruning. You will see that a time derivation is carried out since the filter of the query is not defined on the same time characteristic as used for defining the partitions. The query is based on a HCPR based on an ADSO with partitions((see  also BWonHANA: Data Modeling))

Partitions are defined regarding the characteristic 0CALMONTH:

The query is defined on a HCPR which is based on this ADSO:

The filter 0CALYEAR = [2013 - 2016] should lead to exclusion of all partitions which do not contain data records for these years. When we run the query in Transaction RSRT, we can take a look at the statement(see SQL / HANA Analytics-API  ) 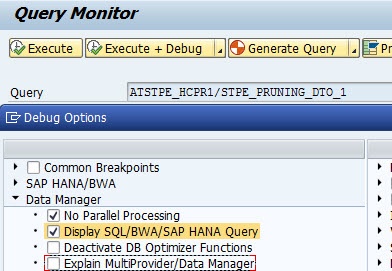 You can see that the year restriction was transformed into a corresponding 0calmonth restriction (on the Hana database all time fields are independent from each other) and added to the statement as a constaint (in relation to the partprovider).

In case you switch of the pruning in RSRT for testing purposes, this derivation is not carried out: 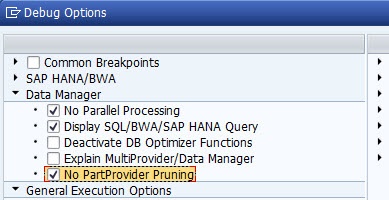