The feature 'Exceptions' allows you to highlight key figure values if the fullfill certain restrictions. It is possible to define whether they are evaluated before or after the Local(List) Calculations: 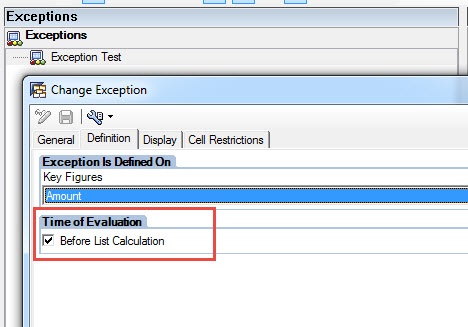 In the past, the BW JAVA frontend (web template) and BW ABAP based frontends like the Bex Analyzer (workbooks) processed so called NULL values (cell where NO value is posted) differently. While the JAVA frontend distinguished correctly between a NULL cell and a Zero cell, the workbook runtime managed both cells in the same way which was somehow an inconsistent behaviour between the frontends. Therefore with 7.31 SP10 a correction has been done (in Note 1883498) so that now also in the workbook runtime the NULL values are no longer managed the same as zero values. This correction also had the intention to improve the performance of queries with large data sets as it deletes all empty(with Nulls) cells from the result set. However as a result the exceptions (dyeing) is no longer applied on NULL values (same as in the JAVA frontend). We recommend for those key figures where you have defined corresponding exceptions (and where you want to have the Null values treated the sdame way as zeros), to use a formula which adds a zero to your existing formula or key figure. This way the system will create 'real' zero values and the exception coloring can be applied again in the same manner as before.

Exceptions are only applied to visible key figures / structure Elements. As soon as a key figure is hidden, any exception Definition based on this key figures is not applied anymore.