As explained in notes 2194279 and 2074801, it is important to use the current content version of this characteristic. It is not recommended to change the delivered version of the object, however, it is possible to create your own hierarchies. It is not allowed to set the display attributes as navigation attributes.

Transaction RSRHIERARCHYVIRT can be used to define a time interval which is the basis for the F4 help of time characteristics. In case of inconsistencies, this transaction also offers an option to refill the corresponding master data tables(more precisely, the SID, P, and X tables) for the characteristics 0DATE, 0CALMONTH, 0QUARTER and 0FISCPER(since the new content versions of these objects contain navigation attributes). So, the button 'Execute Recreate' has no effect for the time characteristic 0CALWEEK.

There is a check called "Consistency of SID and X table for relevant Time Characteristics" in RSRV you can use to check whether the records in the SID, P and X tables are consistent. But for 0CALWEEK will be considered as invalid parameter.

The mode (F4 Modes) being passed to the value help processor dictates where (which database table) the data is to be fetched from. For more information on F4 Help behaviour in BW75 and BW/4 systems can be found under "Examples" section.

The allowed number of weeks for a specific year is according to standard ISO 8601. There are years with 52 weeks and there are years with 53 weeks according to this standard(the first week in the year is the week that includes January 4th). There exists the possibility to influence the system behavior – see SAP note 1063178. Be aware that this changes the behavior for the whole SAP system (means for all business processes). Therefore, the change should only be done if all business processes are fine with the change and after careful testing.

0CALWEEK contain only attributes(display), it does not have any navigational attributes. 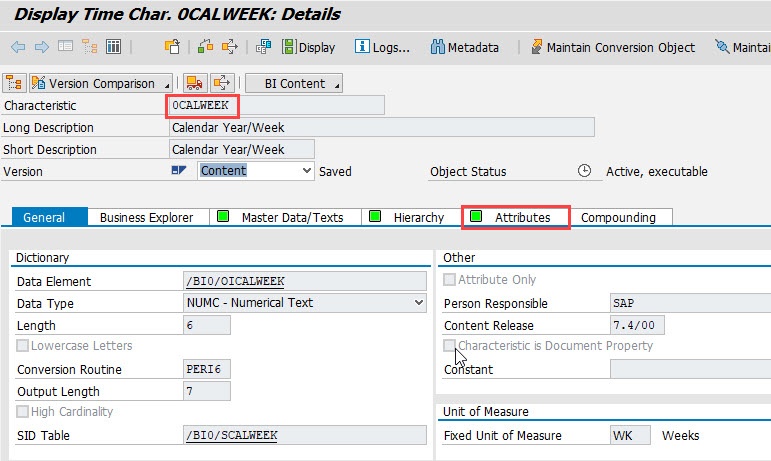 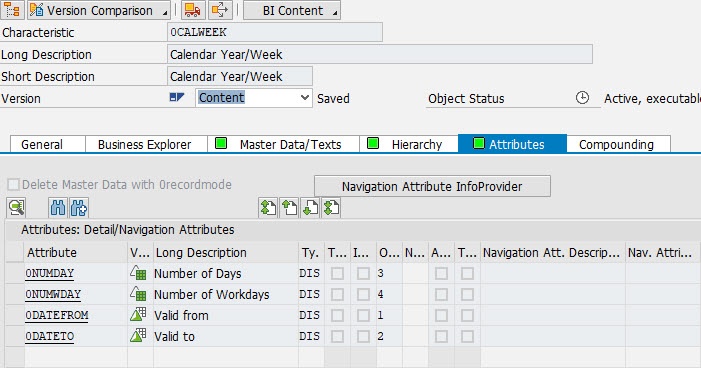 As the system is new, all the master data tables(/BI0/SCALMONTH, /BI0/PCALMONTH) of 0CALWEEK are empty

The content version in BW/4Hana is the same as in BW75.

We check the impact of the definition of the time interval in transaction RSRHIERARCHYVIRT. When the system is new, all the master data tables(/BI0/SDATE, /BI0/PDATE, ) of 0CALWEEK are empty. As 0CALWEEK does not contain any navigational attributes, there won't be any X table generated for this type. We start with the interval 01.01.2019 to 31.12.2019 and save it: 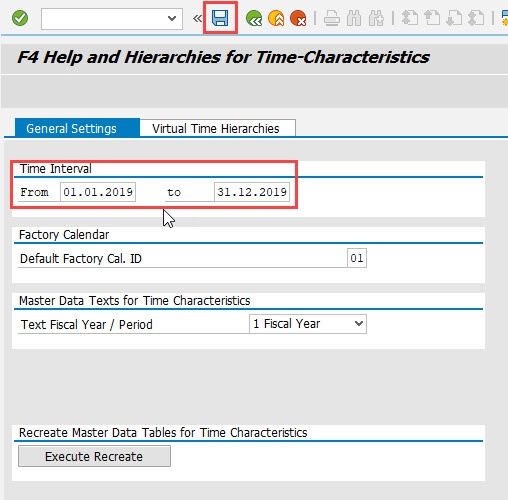 In case e.g. a new data record is loaded where 0CALWEEK is equal to 07.2019(into a provider), the corresponding records will get a X for the flag DATAFL. 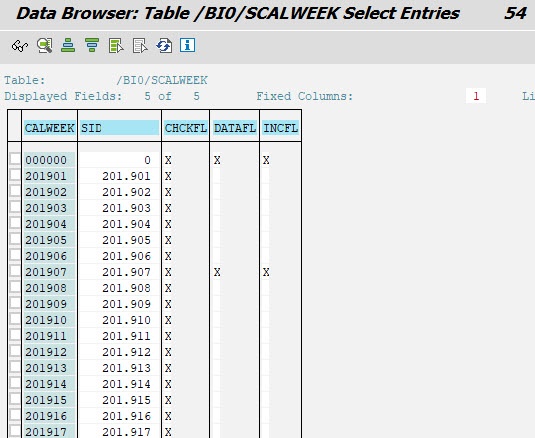 We check the impact of the definition of the time interval in transaction RSRHIERARCHYVIRT. When the system is new, all the master data tables(/BI0/SDATE, /BI0/PDATE, /BI0/XDATE) of 0CALDAY are empty. We start with the interval 01.01.2009 to 31.12.2019 and save it. Then press 'Execute Recreate'

0CALWEEK is not delivered with texts. Therefore, during query runtime, IF_RSMD_RS_ACCESS~GET_TEXT method of class CL_RSMD_RS_0CALWEEK will not retrieve any texts. The table /BI0/TCALWEEK does not exist.

In this section the F4 behaviour of 0CALWEEK will be discussed. If you remember from the previous step, we just loaded one data record to 0CALWEEK, which was 07.2019.
Keeping this information in mind, let's execute a query where 0CALWEEK is used in variable selection. If the query is executed where 0CALWEEK is selected as 'D-Mode' (F4 Modes), below value(s) is returned: 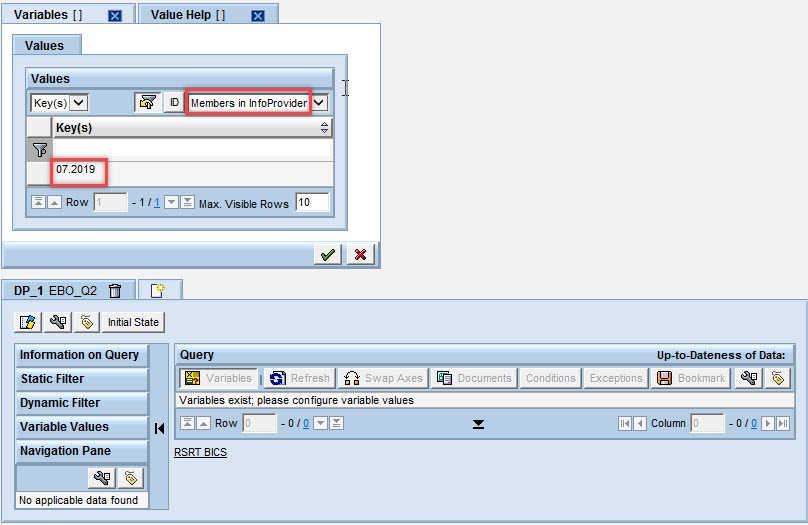 If the query is executed where 0CALWEEK is selected as 'M-Mode' (F4 Modes), below value(s) is returned: 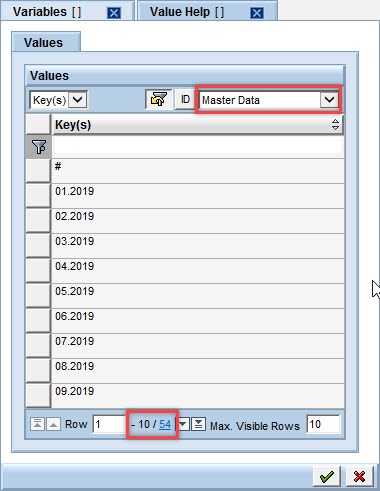 The date range created via RSRHIERARCHYVIRT will be shown in M-Mode. If you ask how the F4 help reads the master data? The answer of the question is hidden in _VALUE_GENERATE method of a CL_RSMD_RS_0CALWEEK. Here the class cl_rsr_hierarchy_virt will be called and the values will be filled accordingly.