In case a query uses zero suppression and an active presentation hierarchy in the drilldown, it might happen that the result is not always expected. As discussed in Zero Suppression, with the help of the RSADMIN parameter NOSUPPRESS_COLLAPSED_NODES you can control the way how nodes with the value zero are suppressed. See also note 2017482 Zero for further details.

When we run the query without zero suppression the result is as follows: 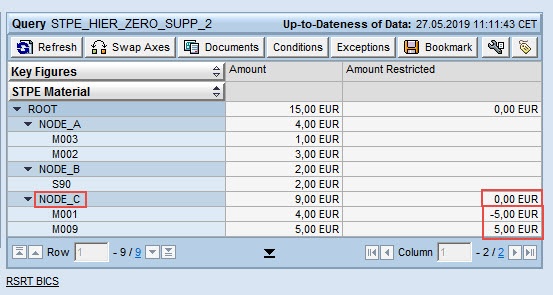 Please note that for NODE_C, the second key figure has the value zero. However, the values of the child leaves are unequal to zero. When the node NODE_C is collapsed, the key figure 'Amount Restricted' only contains zeros and NULL values:

When we now expand this node, the key figure 'Amount Restricted' remains hidden since the OLAP Engine only retrieves the data for the expanded node(delta mechanism) and this can never have an impact on the number of visible key figures in a structure. This behavior is also explained in note 2017482.

However, there is also the feature 'Expand Hierarchy Node' where it is possible to expand a hierarchy to a certain level. In this case the key figure appears: 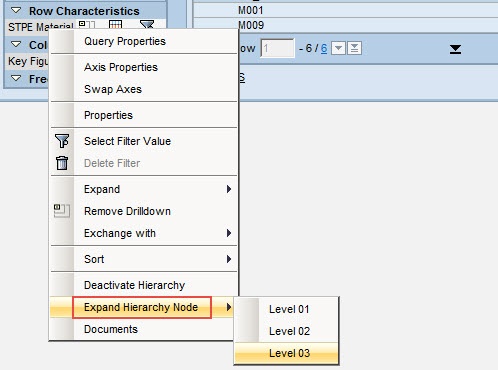 In case this parameter is set to X, the key figure  'Amount Restricted' of our sample query will never be suppressed since there are leaves with values unequal to zero::

Query where a Key Figure only contains Zeros

This sample query contains a key figure where all values are zero(actually NULL values in this example) in a certain navigation state. Then this key figure is displayed as long as the hierarchy isn't fully expanded(only then the Analytic Processor knows that there are only zeros assigned to all leaves and removes the key figure from the drilldown):

When then the node is collapsed again, the key figure remain hidden: