Conversion of the relational universes in BI 4.x, from UNV to UNX

In this article we are describing conversion of XI3.1 relational universe (UNV) to
SAP BO BI4.0 relational universe (UNX).The reader of this article has to be aware that
primary focus of this article is not OLAP universe. The article will reference SAP XI3.1 OLAP
universe only to clarify conversion of this type of universe. The common acronyms that
you could encounter when reading BI4.0 documentation related to the BI4.0 Semantic Layer are:

IDT user guide can be found here. It can help reader understand main IDT concepts and above terminology.

The focus of this article are UNV features/functionalities and their conversion into new BI4.0
universe UNX as well as the best conversion practices.

the feature exists or can have a different workflow or name

the feature exists partially, has a different workflow or have workarounds

the feature does not exist

When converting a universe in a repository, universe Access Restrictionsare converted into
security profiles that can be edited using the Security Editor:

Custom strategies are not supported in .UNX universes.

Customizations to SQL generation parameter settings in the PRM file or in the universe parameters
are not converted. You can add customized values to the converted PRM file, and customize
universe parameter settings in the converted universe using the information design tool.
Tip:
Check and reset custom settings to SQL generation parameters in the data foundation properties
and business layer properties. For information on setting SQL parameters, see the related topic in
Information Design Tool User Guide (the link to the document listed above)

The conversion is not supported. The feature does not exists in BI4.0 DF. The workaround is to use
UNV when you need to use SP.

Universe based on a Data Federator source

The conversion is not supported.The workaround is to create the BI4.0 multi-source universe with IDT
tool against the same data sources. In that way you will leverage Data Federator embedded into BI4.0 platform.

The conversion is not supported.

The conversion is not supported. The workaround is to create BI4.0 UNX universe with IDT tool by
using Java Beans middleware.

The filters in FROM. The feature is not supported in BI4.0

3. How to convert a legacy universe UNV

What you need to know when you migrating universes to SAP BO BI4.0?

Questions and Answers about UNV conversion

Information Design Tool provides the ability to convert a UNV universe from:

In this scenario, we use Upgrade Manager to move the XI3 CMS content to the new BI4 CMS repository 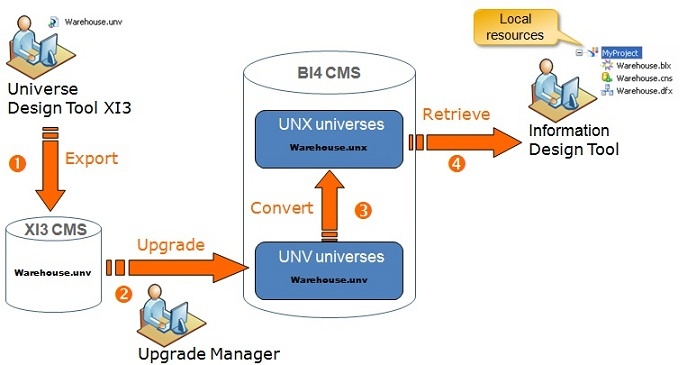 The conversion of legacy XI3.1 universe UNV shown on the above image will produce BI4.0 universe
in BI4.0 repository with extension UNX. If UNX is edited with IDT tool, UNX becomes three local files/resources
with following extensions:

Note: In order to be able to publish UNX universe to the repository you need to use secure connection
which has CNS extension. Please refer IDT User Guide for more info on different BI4.0 connection types

In this scenario, we use Universe Design Tool BI4 to export a UNV Universe into the BI4 CMS repository.
That UNV Universe can then be converted into a UNX Universe using Information Design Tool.

Information Design Tool allows you to convert a UNV universe file without requiring a CMS (logon into the repository). 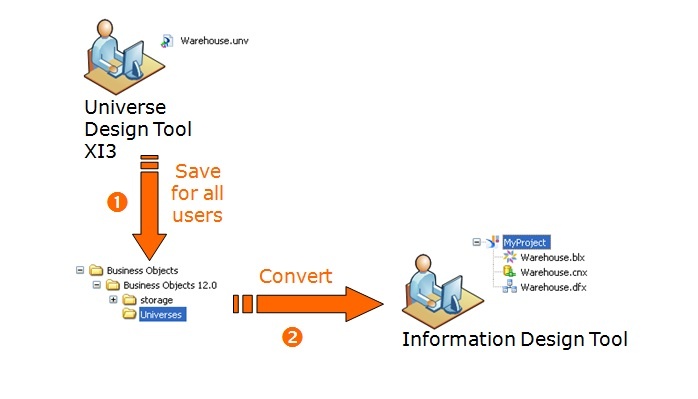 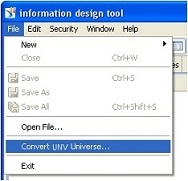 The best practices after conversion

After converting the universe, it is recommended to refresh the structure of the data foundation and run
a check integrity in the Information Design Tool on the converted universe. Certain errors in the check
integrity results can be resolved by following the best practices described below

4. Impact of a conversion to the BI Clients - WebIntelligence, Crystal Reports, Desktop Intelligence 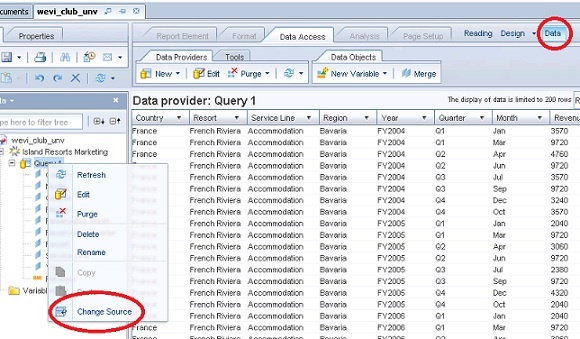 Note: You have to be in Data mode to be able to change webi report source 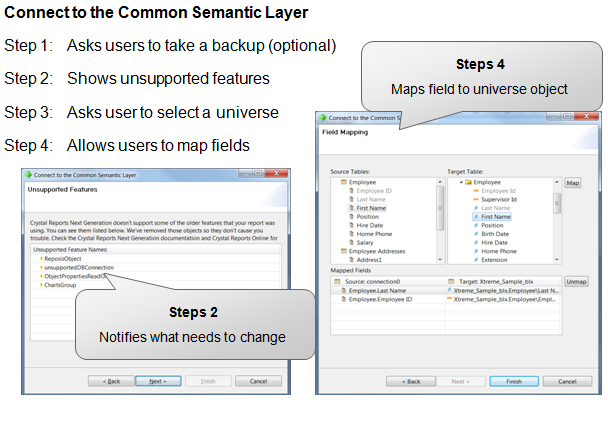