From DEV to QA to PROD using LifeCycle Manager

LifeCycle Manager (LCM) is a plugin for BusinessObjects Enterprise XI 3.1 that allows content promotion and version management. In this article you will find guidelines to help you decide where to install life cycle manager, when is a good idea to use rollback and main steps required to use LCM to promote (transport) content from one BOE system to another.

Where to install LifeCycle Manager?

Installing in DEV, QA, PROD or in additional standalone server?

When using LCM for content promotion, you create jobs. Each job contains infoobjects that can be moved from one BusinessObjects Enterprise deployment to another BusinessObjectsEnterprise deployment. Jobs are infoobjects itself and are stored in the CMS repository and in the Input FRS. Once a job is created it can be used several times to promote content from one deployment to another. Something to consider when deciding where to install LifeCycle Manager is that you probably want LCM jobs in a deployment where you have a backup strategy.

LCM is a server installation and requires the following servers to be available when you are installing:

LCM SP2 is only available as a full install for Unix. Unix installs allows you to perform a distributed install. For Windows full install is only available for the first version of LCM, in this first version distributed install is not implemented. This means that in Windows you need all the above servers to be on the same machine. You could manually deploy LCM in a distributed DEV, QA or PROD deployment, or you could add a third server which just has the above servers plus FRS (as jobs are stored in the FRS) and use this server only for content promotion from your deployments. Having a third server for LCM is possible as long as your deployments are not isolated as LCM has to be able to connect to source and destination deployments to promote content.

Where to install in a clustered deployment?

If you have a clustered deployment, you could have a standalone server just for LCM (CMS+Adaptive Processing Server+Web App+LCM) or you could install LCM in one of servers in the cluster. If this is a Windows distributed install (i.e. Web Application Server and CMS are on different machines) you will need to do a manual install of LCM. 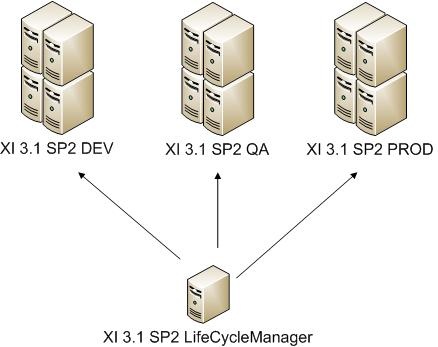 Where to install if deployments are isolated?

If your DEV, QA and PROD deployments are isolated, you will have to install LCM on all your deployments and use the LCMBIAR export/import functionality to move content from one deployment to another. 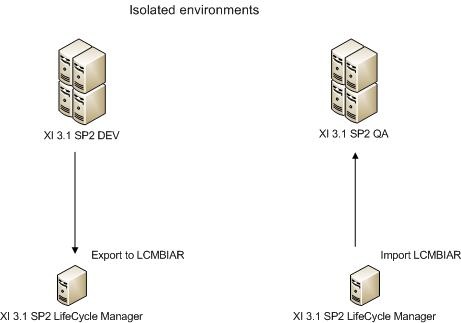 How to transport content from one BOE environment to another?

To transport or promote content, you first have to specify which content you want to promote. This is done in LCM tool with 3 main steps:

In SP2 it is now possible to override Universe connections in bulk.

When configuring security you have the following options:

When to use rollback?

Rollback can be used when:

Access to LifeCycle Manager features is configured by rights on LCM Folder and on LCM application.