Downtime Announcement: Please note the SAP Community Wiki will be unavailable due to a system upgrade on Thursday, September 24th between 6 and 7 AM CEST

You use a number of machines in this pattern. The purpose of each machine is described in detail below.

The following diagram shows the machines in this pattern and how they connect with one another: 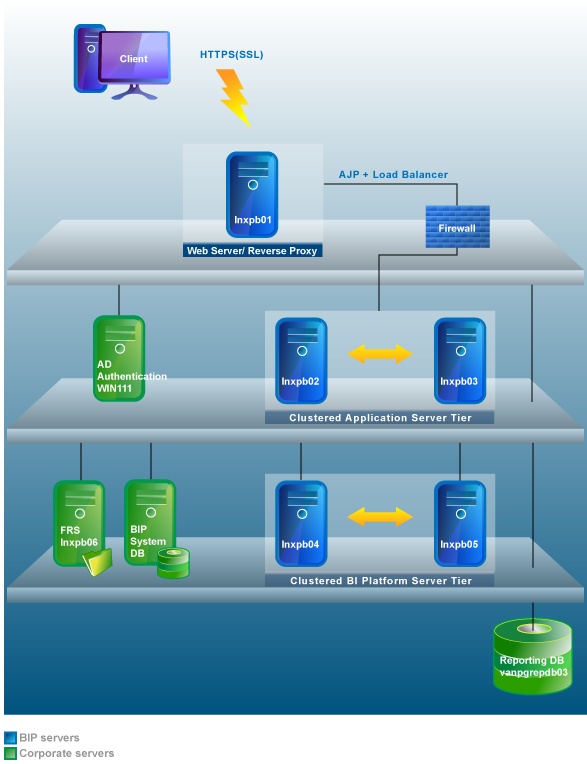 The external machine hosting the web server, reverse proxy server, and load balancer is typically outside the company's external firewall. Customers can access BI platform web applications, such as BI launch pad and the Central Management Console (CMC), from the client machine.

We chose Apache because it is the most commonly used web server on the internet, hosting over 60% of all websites.

Apache 2.2 is the current mainstream release and is the latest supported version of Reverse Proxy Server in BI 4.0 Feature Pack 3.

For this pattern, we chose AD authentication although other third-party systems could also be used.

This pattern uses a two-machine cluster, in which each machine (lnxpb04 and lnxpb05) hosts all of the BI platform servers. This configuration provides redundancy and some scalability. BI platform web applications detect both BI platform server machines (specifically, they detect all CMS servers in a cluster), and automatically load balance their requests. If one machine fails, the web applications automatically send all requests to the other machine.

The file repository server (FRS) contains all of the reports and other BI documents that have been created. When a user creates a BI document, the BI platform servers retrieve the data from the company database (Reporting DB), generate the document, and store it in the file repository server. In production environments, you should host the FRS on its own machine because the number of BI documents can grow to a large number.

Because BI documents often contain sensitive information, you should host the FRS on a secure machine. Typically the BI platform administrator does not have access to this machine.

BI platform uses a database for its system data, which is called the system database or CMS database. For example, when a user wants to see a report, the CMS checks the system database to find the location of the report. For production systems, you can host the CMS database either on the database included with BI platform or on the company's existing database. Both are recommended for production systems, but companies often use their own databases in order to simplify administration.

We chose to use Sybase ASE because it is a commonly used database in Linux deployments.

The reporting database hosts the company’s data. When a user wants to report from, analyze, or view company data, the BI platform servers retrieve data from the company’s database, perform the analysis and formatting, and either serve the result directly to the application layer or store it in the FRS.