In this article you will find information regarding the different tools you can use to troubleshoot issues with Crystal Reports connecting to BW.

The report definition contains information about the report template.

The saved data information contains information about the data in the report. This information will not be available if a report is not saved with data.

The Latest Report Changes provide information on recent changes to the report (listed on as changed or unchanged). This information will not be available if a report is not saved with data. 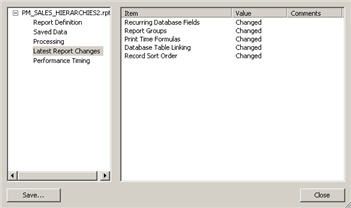 Performance Timing provides statistics related to the time it took the report to open and to format pages.

To be able to trace the SAP connectivity for Crystal Reports the necessary registry entries need to be configured.

The entries can be found in the following part of the registry:• HKEY_LOCAL_MACHINE\SOFTWARE\Business Objects\Suite 12.0\SAP.
Underneath this entry in the registry, each of the connectivities has its own folder.

Each of the connectivity registry keys has a value called Trace which accepts a Yes or No as a value. In addition to the Trace value, the user needs to configure the trace directory.
The value for this setting is under the registry key SAP.;

To activate the connectivity trace for Crystal Reports

The publishing integration can use either an SAP Gateway or the BW Publishing Service.

For the SAP BW connectivity you can also look at the following items as part of the troubleshooting process:

Using the RFC trace, you can track which remote calls are made to the SAP system during the execution of a report from BOE or Crystal Reports. You can display and further analyze the trace records logged in the trace file.

From the recorded trace you can deduce:

The runtime of the RFC library generates two different trace files. Error messages are written to the file dev_rfc.trc The system then creates these entries even if the RFC trace is deactivated. If the RFC trace is activated the developer traces are generated in addition to the dev_rfc trace. The file names follow the following syntax: rfcxxxxx_yyyyy.trc, where xxxxx and yyyyy are the number of the operating system process and the number of the operating system thread

You can do this same RFC SDK tracing when the report is processed by BOE servers.

When troubleshooting issues when viewing or scheduling Crystal Reports in BOE, you must first verify that the report works fine in Crystal Reports. To troubleshoot in BOE you can use tracing; unified tracing (BO Classic + Crystal Classic traces); is available as of Business Objects XI 3.1. In order to switch on client traces, you need to create a file called <application>_trace.ini, for example crproc_trace.ini if you want to trace the Crystal Reports Processing Server, [BusinessObjects install folder]\BusinessObjects Enterprise 12.0\win32_x86;in Windows environments or, in Unix environments [BusinessObjects install folder]\bobje or the current working directory of the command that started your servers.
For Crystal Reports processing in BOE the following traces may be useful:

More information on BOE traces can be found here:Traces in XI3.1