A Universe should be designed to deliver reports that maximize the performance of data returned.  Database delegated measures are a feature in universe design that can greatly impact reporting delivery.

Database delegated measures can improve query performance.  Taking advantage of this built in feature can give a great boost to the speed of the query result set returned in reporting.  A projected aggregation is set for each measure object in the universe design.  Database delegated objects perform the calculation on the database server and return only a calculated result set.

This is a discussion of how to set this feature in the Universe, what impact this has on the reporting SQL and what are some of the expected results in Web Intelligence (Webi.)

How to set the database delegated measure object

The performance improvement occurs because a smaller number of rows are returned to WebI.  Imagine this compared with a high volume of rows and multiplied by many reports.

Using the same example, if a query is run with year, quarter and sum of revenue, then  WebI will return a result set of just the summed year and quarter. If on the report block, the quarter is removed and a sum of year is required, the Cells will return #TOREFRESH.  When this occurs, the sql must be regenerated to accommodate the new aggregation level. 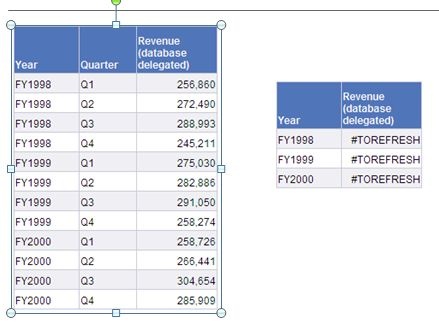 When two blocks exist of different aggregation levels, the sql must regenerate to accommodate each grouped level.  This is called grouping sets.  A query refresh regenerates the sql.  A sql is created for each table block, year, quarter and sum, and then another sql for year and sum.  The sql uses a union command to combine results together.

Following the sql rules for combined queries, when unions are used objects they must have the same number of objects so WebI generates a place holder.

What are the expected behaviors in when using Smart Measures?

A refresh will be required for each sql query statement that requires aggregation.

When purging data, each sql query in the report will be regenerated and refreshed.

When using multiple levels of aggregation a separate sql query for each grouped set on the report.

What parameters should not be used with Smart Measures?

A Smart Measure cannot be combined with the JOIN_BY_SQL parameter.  These parameters should not be used together in the same universe.