The component life cycle describes the sequence of steps that occur when we create a component object from a component class. As part of that life cycle, Flex automatically calls component methods, dispatches events, and makes the component visible. The lifecycle of component in flex includes creation of a component holder, creation of its children, setting of their sizes and positions, and dispatching of events.

This topic covers component life cycle methods of flex components. It includes the usage of each method. Following methods play a major role in component rendering.

We shouldn't call this method directly. We can trigger this method by calling invalidateProperties() after we give input. commitProperties is a method where we do some calculations required for the functionality based on given inputs to the present component. This means we shouldn't do calculations in any other places like setter methods.        Bad practices:- 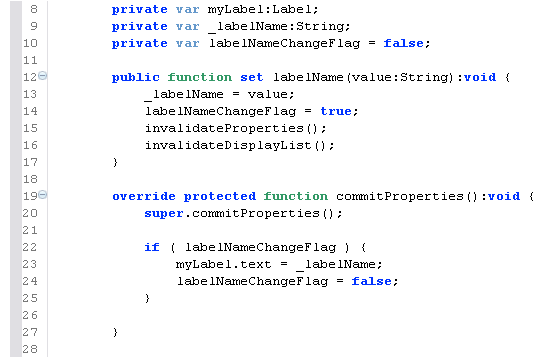 This method will be used to draw the UI. A component doesn't appear on the screen until its updateDisplayList is called. This method mainly used to set the positioning and size for all the children. This method will get two parameters. They are unscaledWidth and unscaledHeight, where these parameters are the width and height of the present component. We can make use of these parameters for positioning and sizing of its children. We shouldn't call this method directly. We can invoke this method by calling invalidateDisplayList() method.

We can position and size the children using move(x,y) and setActualSize(width, height) methods.

This method will be executed in a top down approach. First it executes for the parent, sets the size for its children, then it goes to its children and again their respective updateDisplayList is called.

This method will be used to create children. We shouldn't call this method directly. As soon as we call addChild() method on some display object, flex calls createChildren() method in response to that call. While implementing custom components it is suggested to override this method and to call its super method implementation. This method is only used to add children to the present component. But positioning and sizing of children is not recommended to do in this method. We have updateDisplayList method to take care of this.

measure() calculates the default size, and optionally the default minimum size, of the component. This is an advanced method that you might override when creating a subclass of UIComponent. The default implementation of measure() sets measuredWidth, measuredHeight, measuredMinWidth, and measuredMinHeight to 0. In this method it calculates the measuredWidth and measuredHeight of a parent depending on its children size. It is not recommended to calculate the size of the parent or its children in this method.

Flex does not call the measure() method when the user sets the height and width of the component. When we use the addChild() method to add a component, Flex automatically calls the invalidateSize() method.