The purpose of this page is to illustrate how the qRFC framework functions and how qRFCs are related to tRFCs. It's main purpose is not as a troubleshooting resource but a knowledge resource.

Like tRFCs, queued RFCs (qRFCs) are a an abstracted type of RFC call. They are not physical RFC calls like synchronous and asynchronous RFC calls. qRFCs are an extension on the tRFC framework, allowing one to serialize (i.e. set and enforce the order of execution) multiple tRFC LUWs. As such, qRFC calls use the same or similar framework function modules and tables as tRFC calls, as well as additional framework FMs and tables to track serialization and monitor resources.

Because qRFCs are an extension of tRFCs, I will be assuming the transactional RFCs page has been read before reading this page, and that the tRFC framework FMs and basis tables and their roles are well understood

Once you understand how the tRFC framework functions, most of the information you need to understand qRFCs is contained in the following help pages:
https://help.sap.com/saphelp_nwpi71/helpdata/en/44/fb0b85e1f141dfe10000000a1553f6/frameset.htm - Queued Remote Function Call (qRFC)

As such, this page will be dedicated to emphasizing key concepts and connecting various examples of qRFC scenarios to the transactions, screens, traces, and records you would find in an ABAP AS system.

qRFCs are classified by the direction in which they're processed. There are two classifications, Outbound and Inbound.

To call an Outbound qRFC, the syntax is the same, however, the outbound queue name has to be defined first by calling TRFC_SET_QUEUE_NAME

To Call an Inbound qRFC, the inbound queue name must be set by first calling TRFC_SET_QIN_PROPERTIES

qRFC calls, in addition to sharing the same properties as tRFC calls, are assigned to queues using the TRFC_SET_QUEUE_NAME or TRFC_SET_QIN_PROPERTIES FMs. 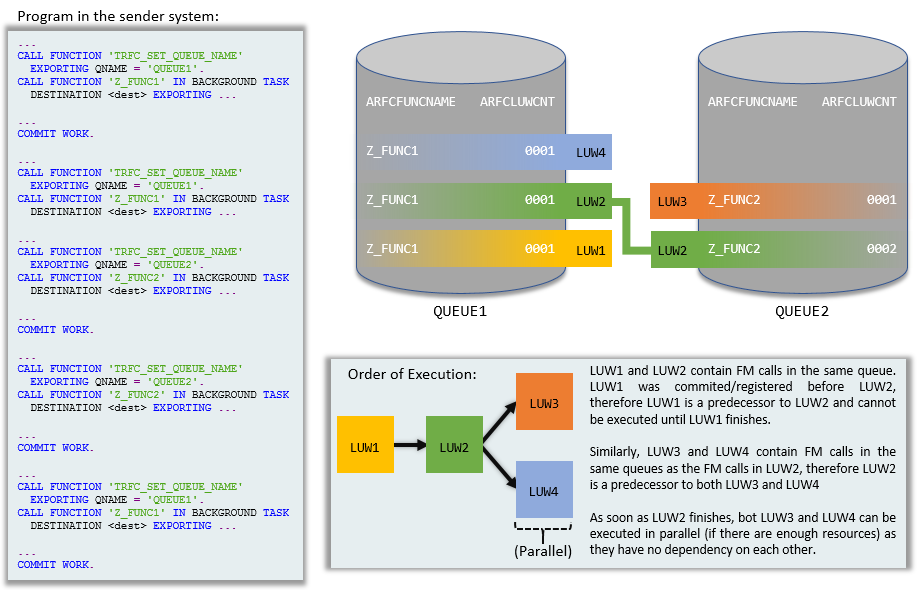 In addition to the FMs and tables inherited from the tRFC framework:

The following Function Modules are a part of the outbound qRFC framework:

The following tables are a part of the outbound qRFC framework:

There are two main types of outbound schedulers. Each system has 1 system-wide Outbound Scheduler (%QSEND_SCHEDULER, sometimes referred to as the Send Scheduler), and as many Destination Schedulers as there are registered destinations in SMQS.

The state of these schedulers is tracked via the QSENDDEST table. 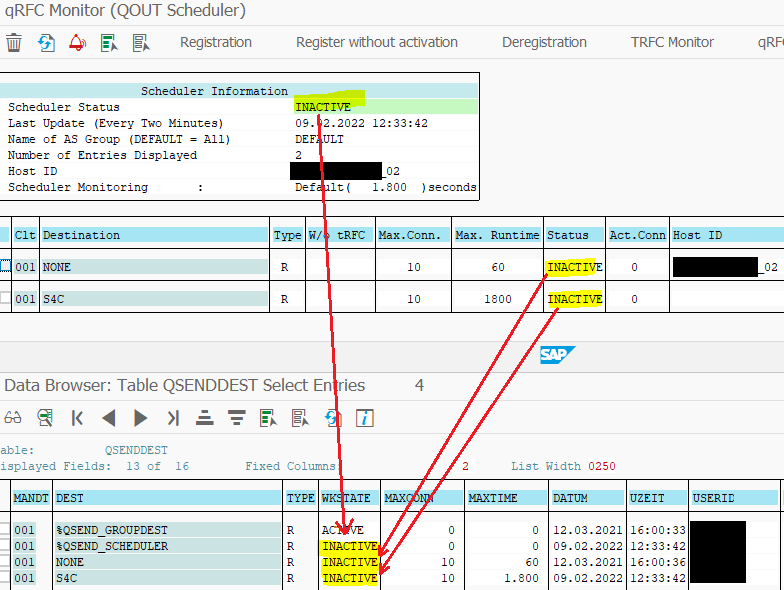 The "Host ID" field tells you on which host that particular scheduler is running (or, if the state is INACTIVE, ran last).

Each scheduler should correspond to at most 1 ABAP session. If the state of a scheduler is INACTIVE, then there should be 0 ABAP sessions acting as that scheduler.

When the schedulers are not INACTIVE they should be able to be seen in SM04. For example (in no particular order):

When performance issues occur inside FMs called via the qRFC framework, a proportional increase in roll wait time is expected. Suppose our qRFC server task has a response time of 1 second and makes about 1 second worth of database requests. Consider the following values:

This leads to misunderstandings when examining the RFC response time in the Workload Monitor (ST03) of systems which make many tRFC/qRFC calls. This is because the aggregation of this workload data somewhat conceals the actual problem of worsening DB time. Comments often heard are similar to "most of the increase in response time seems to be roll wait time", which is simply a side effect of the tRFC/qRFC framework.

(Note that these times & distributions of time vary depending on the amount of parallel qRFC activity in the system.)

Additionally, note the RFC Server & Client sub records when considering the timeline below.

The timeline was constructed from the ST05 trace 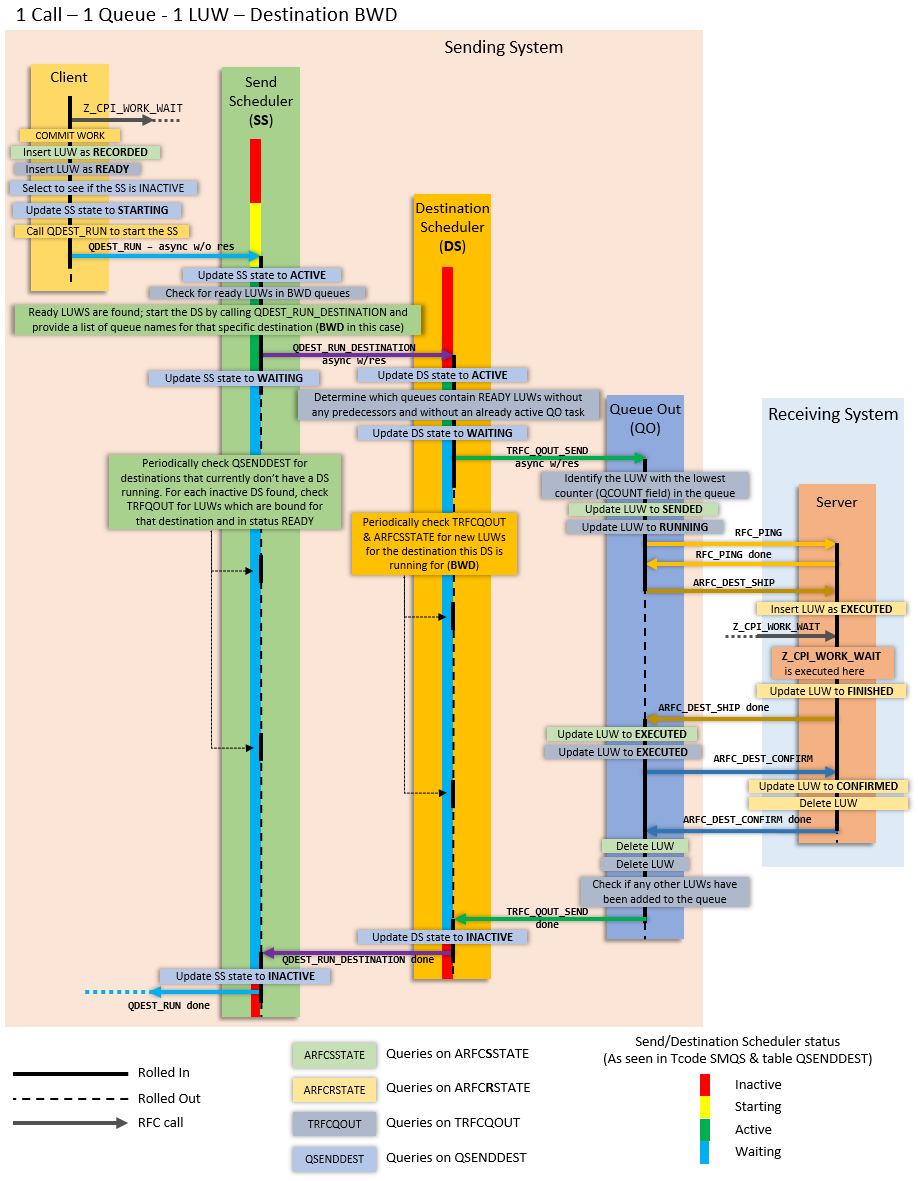 While the above figure is quite busy, the main points are as follows: 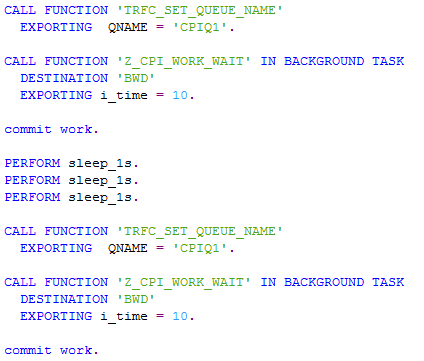 In this case, there are 6 STAD records created:

Notice how the second server task doesn't start until the first one finishes. Also note the RFC sub records, it's the already running QO task that checks and executes the LUW that was registered second (as opposed to the DS starting a new QO task).

Note that the calls to RFC_PING, ARFC_DEST_SHIP, and ARFC_DEST_CONFIRM have been consolidated into a single graphic in this timeline.

Inbound qRFCs are a further extension built on outbound qRFCs.

When an inbound qRFC LUW is created, it is first registered as an outbound LUW in the sending system via the ARFCSSTATE, ARFCSDATA, and TRFCQOUT tables.

Then, using the outbound qRFC framework, the LUW is transferred to the destination system via a call to ARFC_DEST_SHIP, where the LUW is saved to the TRFCQSTATE, TRFCQDATA, and TRFCQIN tables (which determine the queues and serialization).

The inbound scheduler is then activated (if not already active) and the LUW is executed via TRFC_QIN_DEST_SHIP. 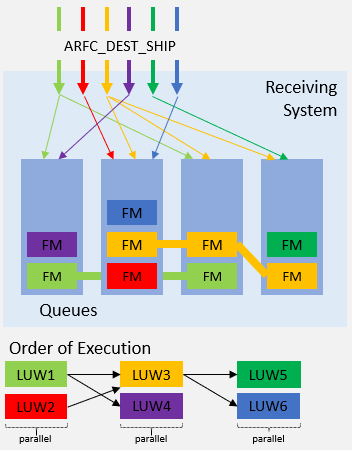 And the following tables:

There is only one system-wide inbound scheduler in a system.

There is no need for destination schedulers for inbound LUWs as once an LUW is registered in the TRFCQ* tables it is already "in the destination system" in which is will be executed. All that's left is to execute the inbound LUWs in the correct order.

(It is possible to define a "destination with logon data" when registering queue names in SMQR in order to restrict execution to specific application servers or under a different user and/or client.)

The state of the system-wide scheduler, and the registered queue names, is stored in QIWKTAB. 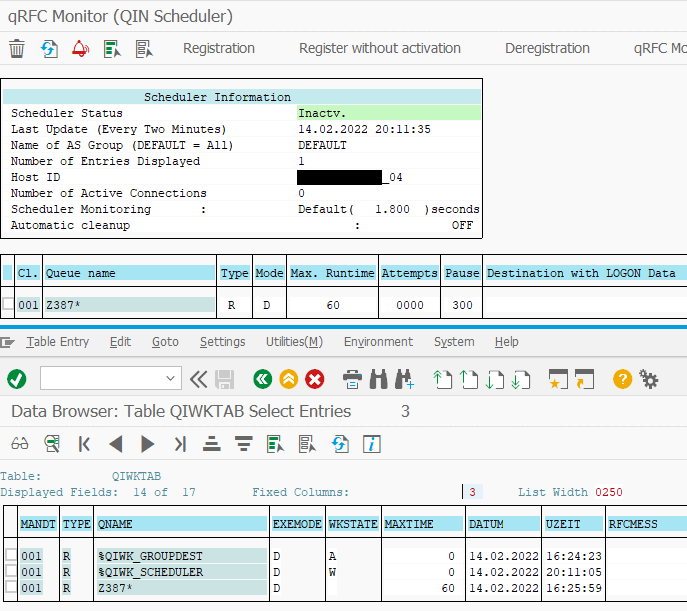