You may know about bad performance when one wants to retrieve the change documents.

To reproduce the issue you just need to go to transaction BP-> Open any BP -> Menu: Extras -> Change History -> For This Partner.

This is in SAP GUI. But the same story can happen in Web UI as well. We all know that our customers should disable unwanted assignment blocks.

This especially applies to Change Documents. Imagine if one user clicks it incidentally and it takes 1 hour.

Customer has serious concerns regarding performance and the below listed ABAP trace shows that it's even worse than we all could imagine.

But in fact this means that proposed solution or workaround will impact the business as not all change records will be shown.

Basically there are several reasons for such extremely long selects.

The first one is the suboptimal access to the table CDHDR. We have a function: bus_cdobjectid_select_wth_like which is using patterns to get the data.

The ABAP code as above will cause the SQL as below. This statement is executed with extremely slow index scan, but only taking into account the second reason.

The second reason is of course, the amount of data in the table CDHDR. But this table usually is known to be one of the biggest tables in the system.

We need appropriate indices to get the data from this table. But due to very old design it can not be done.

This means that we are able to create an index on only on the field, but also on the part of the field. The function to be used is SUBSTR(str, x, y)

First of all we need to read the data accordingly. I wrote the following native SQL in ABAP:

But such code does not work.

Next I found a workaround: we can use nice classes as: CL_SQL_CONNECTION, CL_SQL_STATEMENT, CL_SQL_RESULT_SET. Finally I wrote the following Function Module:

This function is working in the same way as the standard one, but it uses SUBSTR function instead of LIKE.

Now we need required Function-Based Indices to be created on Oracle.

For that I wrote a report:

Finally I made an enhancement of the standard function module:

To prove that my new indices are used, i did an explain in ST05. 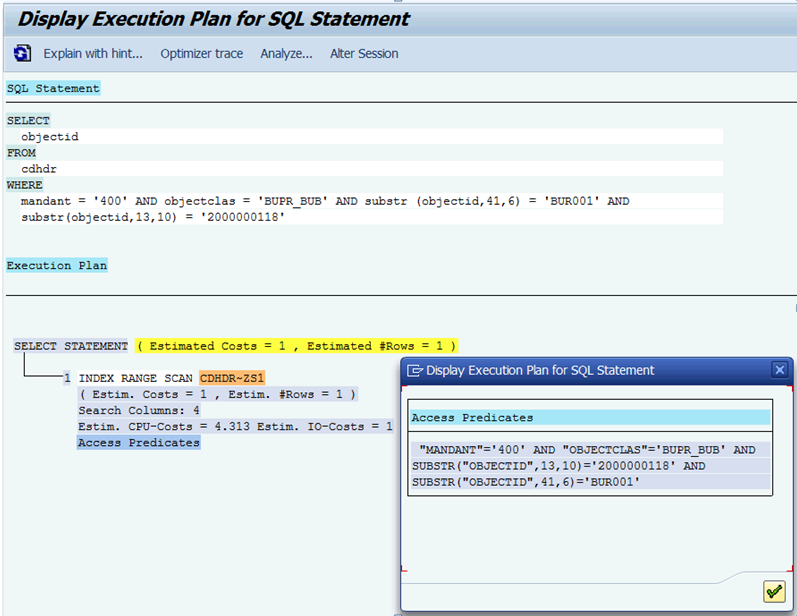 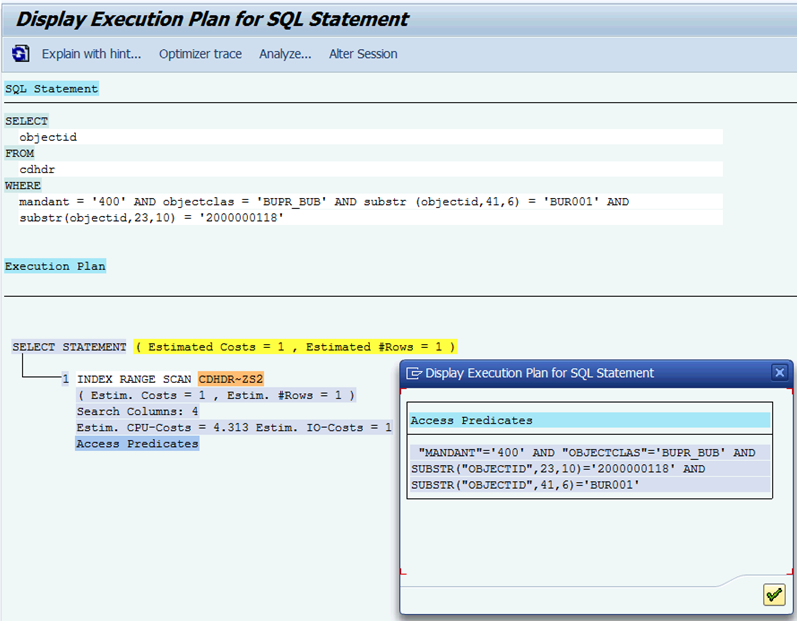 I need to point out that by customizing in transaction BUS7 or directly via the table TBZ1F  you can insert your own function modules to be processed.So that you can do a substitute for the functions 'BUB_BUPA_EVENT_CHGD1' or CRMH_BUPR_EVENT_CHGD1.
If any questions, please let me know.
Have fun! With Best Regards,Dmitry