EEM scripts provide functionality to control execution logic depending on the result status of particular messages. In detail there are two ways to control the logic:

Both features are described in the following.

Errors in script execution are categorized into the following classes:

By default an error of level 4 leads to termination of the script execution. This behavior can be adapted by setting the script configuration parameter {{abort.result.status}}to a different value.

In some cases it is required to terminate a script due to an error, but still a proper logout should be attempted. For this purpose a step can be marked as finally step. In that case a step is executed if one of the selected target result statuses is selected. Recommended use is to select all statuses: 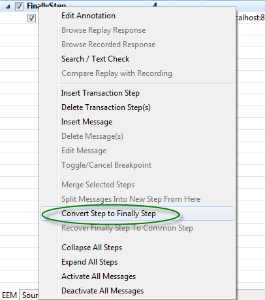 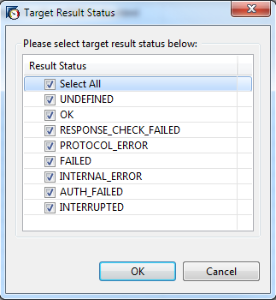 The special step attribute finally can be reverted by using the context menu item Recover finally Step to Common Step.

Consider the example below in the screenshot:

Execution where step FinallyStep is NOT marked as finally:

Execution where step FinallyStep is marked as finally:

One use case is to terminate script execution for a script that tries to update some business objects but fails to acquire a lock on this object - e.g., because a concurrent script execution on a different robot already owns this lock. Reaction might be to cancel script execution but still log out the user.