System data/traces are only available if tracing has been enabled (Run Script with trace or Set temporary configuration). It is possible to configure so that HTTP log and DSR records are always written. See also Trace Enabling for EEM

1 . The parameter "Expire in seconds" of temporary configuration should have a value higher than 60 seconds (default 1800)

3. Is the extractor running?
Go to work center SAP Solution Manager Administration, in Infrastructure launch the Extractor Framework view. For each technical scenario there is an extractor EEM system data of TechScen .... See screen shot:

the SMD Upgrader must be executed after applying an LM-Service patch.
This can be done in SOLMAN_SETUP -> Basic Configuration -> Step 2.4 (Solution Manager Internal Connectivity) -> Activity: Run Java Upgrader

From the screen shot above it is clear why the trace collection aborted (SMD Agent cannot be reached at this time) but in other cases when the BusinessTransaction*.xml could be retrieved it makes sense to start a single analysis just with one file that is uploaded in the E2E Trace application for the system. Proceed as follows: 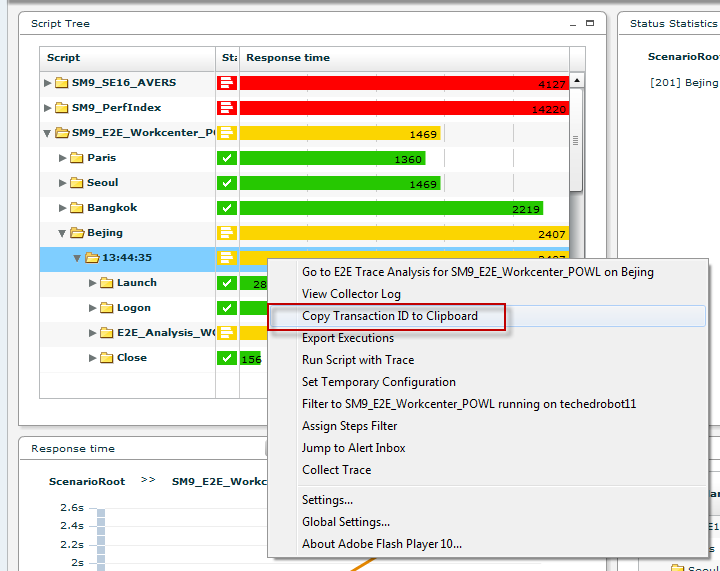 - Open the E2E Trace application from the RootCause Analysis work center for the Technical System(s)/Scenario you want to collect the trace and paste this id there: 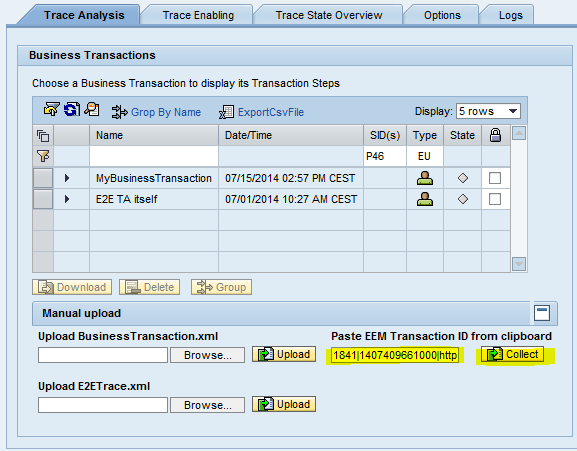 - Trigger the server-side trace collection and check the progress and in parallel the default.trc as mentioned above.

5. In SAP Solution Manager 7.1 SP03 and SP04
- System data of SAPGUI scripts are not displayed in monitoring UI because trace collector aborted during trace collection. In default trace of J2EE engine you can find the exception:
ABAP SysLog collection was aborted: For input string: ".
This problem is solved with LMSERVICE patch 2 for SP03 or LMSERVICE patch 1 for SP04.

The reason is a bug in statistic recrods in managed system leading to extremly high numbers which is solved with note 2071875 (Incorrect Average RFC Interface Time ("CPIC/RFC")).

Apply in the managed system the Kernel patch mentioned in note 2071875.