This article will teach you the different possibilities to customize the exchange rates.

In OB22 you customize the currency for your company code and the rules among them. 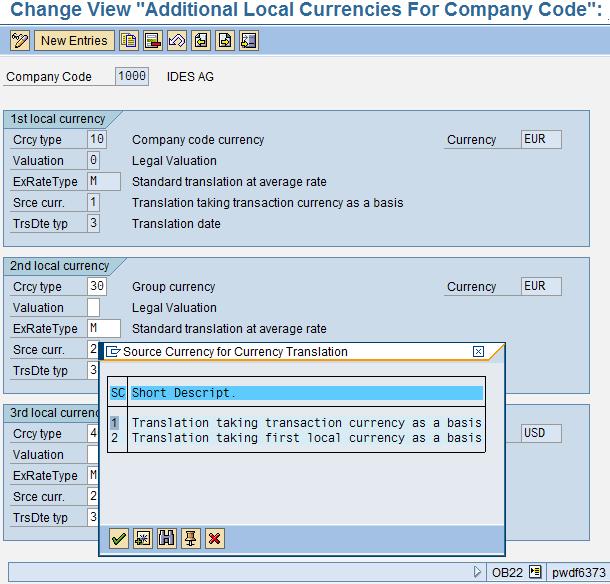 The field "TrsDte Typ", determine which date from document will be take in account to get the exchange rate from OB08.

Note 335608, has a very good reference for this customizing.

Hint: When you have the same currency in the first and second local currency, in the second always selects 2 "translation taking first local currency as basis", this will avoid rounding issues and exchange rate differences. Remember to only change the settings in OB22 at the year is over, with no documents posted in the new fiscal year, this will avoid several inconsistencies on your system. 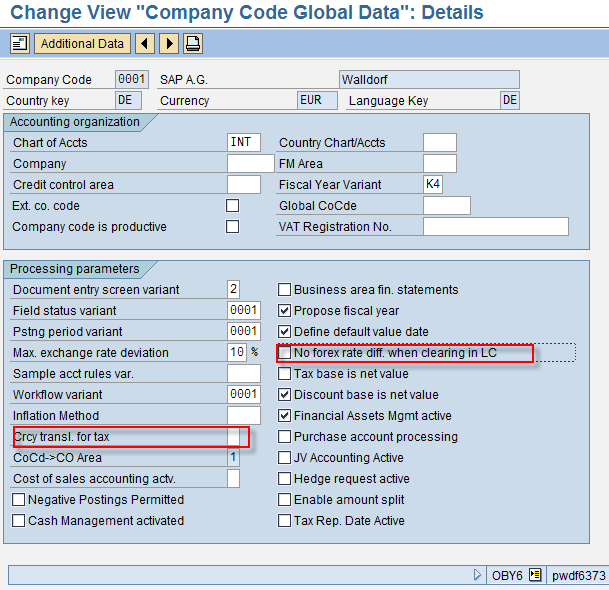 Under this transaction you could see the Company code currency and also two relevant fields for exchange rates:1) Crcy transl. for tax (TXKRS): this field you indicates which date will be take in account from documents, for the tax line items to be posted, default is blank, that considered the document currency.

2) No forex rate diff. when clearing in LC(XSLTA): this flag ignore exchange rate when clearing in the local currency, does it mean if there is some difference no error messages will be raised, or even a line item posted with the difference. See example bellow:In this example, the local currency is USD, and the foreign currency is DEM. There is an open debit item of 1000 DEM, which at the time of posting equaled 650 USD. This item is now to be cleared with a credit item totaling 650 USD. The current exchange rate is 0.55 DEM per USD. The actual transaction in this example could be the clearing of an incoming payment, the credit item, against an outgoing invoice, the debit item. If this indicator is set, the system will use the 650 USD of the debit item as the amount to be cleared. The credit item for 650 USD can be cleared against the debit item without having to post any exchange rate difference. The clearing document then appears as follows:

If the indicator is not set, the system has to determine the current equivalent of 1000 DEM in USD. In our example, the amount would be 550 USD, which would result in a difference of 100 USD during the clearing procedure. The user must then create a credit entry for 100 USD so that the clearing transaction balances out to zero. The system then adds an exchange rate difference posting for the same amount. The clearing document would appear as follows:

The customer paid 650 USD although 550 USD would have been sufficient to cover the equivalent of 1000 DEM at the time of payment. On the one hand, there is gain from overpayment, while on the other, there is a loss due to the change in exchange rate.

All differences that happens during the process of post and clearing, should be determined to some specific account in order to avoid errors.

Using FBKP, in only one transaction, you can maintain the accounts for the exchange rate differences during a post or referent to taxes: 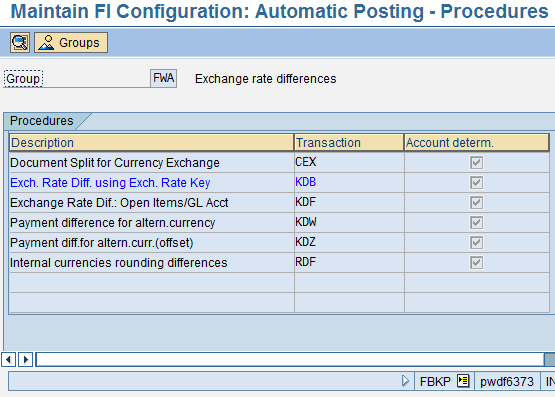 For each of these procedures you can maintain a specific account for debit and credit.