This content is created to clear any misconceptions about the field FRWAE in the COPA line items. Customers often think that the line item is stored in the transaction currency and are confused when they find FRWAE filled with another currency. The content should make it clear what FRWAE represents and how it is filled. 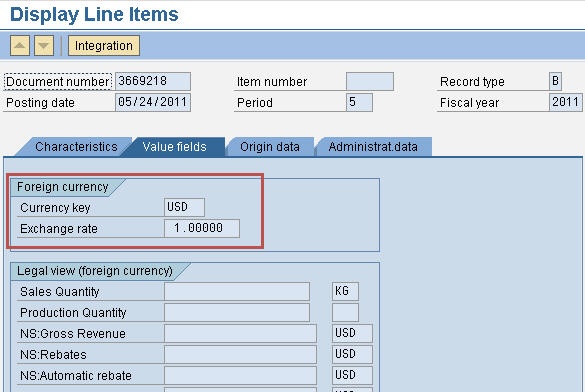 Usually the foreign currency will be the transaction currency of the sender document in case you are dealing with billing documents. However it's also possible that the amount in operating concern currency is translated based on company code currency. This is based on the logic explained in note 429517. In this case the COPA line item will then contain the company code currency as foreign currency. When billing documents are reposted to COPA using KE4S if the exchange rate has changed then FRWAE could also change.

Foreign currency in record type B

As per KE24 the following amounts were calculated:

With the current design of the BAPI postings, the system will always use transaction currency as source currency in case a translation is required in CO-PA. In case table 'VALUEFIELD' is not provided, CO-PA will take over the amounts directly from the accounting interface table. If you want the FRWAE (Foreign Currency) as Company Code Currency, then you need to give INPUTDATA-CURRENCY as Company Code Currency and of course the values also need to be supplied in this currency.”

In general FRWAE and KURSF are technical fields that should not be used for any reporting purposes. The values in foreign currency are not important since they are only for display purpose. They are not stored in any database. The system design is such that we should be reconciled with FI in company code currency as far as possible.

SAP Note 604936 : No transfer of group currency for FI/MM postings