How to Analyze Actual Settlement

How to analyze actual settlement data?

The purpose of this page is to provide tools how to analyze settled data in CO-PC-OBJ.

This article deals with ways of analyzing settlement, which do not require debugging or programming skills and provides an extensive explanation of the settlement results.

You can find relevant SAP notes and KBAs (knowledge base articles) for order settlement by using the component CO-PC-OBJ or  CO-OM-OPA-F and the search term "Settlement", or by using transactions (such as KO88 or CO88). If you received an error message or a program termination, then this should be specified in the search. We recommend to use the five digit error code (e.g. "KD256" or "KD 256") or the report name (e.g. RKO7CO88).

Please have a look at

On the initial screen for settlement, you can display the previous settlements for a sender by choosing "Goto -> Previous settlements". This shows you the detailed procedure in which the sender was settled, which debits were made for each settlement, and how these debits were distributed to the receivers. You can also go to the accounting documents that were created from this screen.

This analysis method is always useful if you experience incorrect updates of documents. It is also very useful if you require an overview of whether and when the object has already been settled.

Further information can be found in SAP note 373685.

3.1 General Introduction to The Flow Trace

From Release 4.0 it is possible to write a flow trace for a single settlement. You can activate this in the initial screen menu in KO88 by choosing "Extras -> Activate flow trace".  Once you have called up the settlement, you can see the basic list of the log. This provides a very good picture of the technical progress of the settlement and of possible errors in settlement Customizing. The log explains comprehensively why the settlement settled which costs and where. It is recommended that you use this function. It often enables you to search for errors successfully without debugging.

The following graphics show how the flow trace can be evaluated.

3.2 Example 1: Settlement of a Production Order with Status REL

When you settle production order 60003641 the flow trace provides the following information: 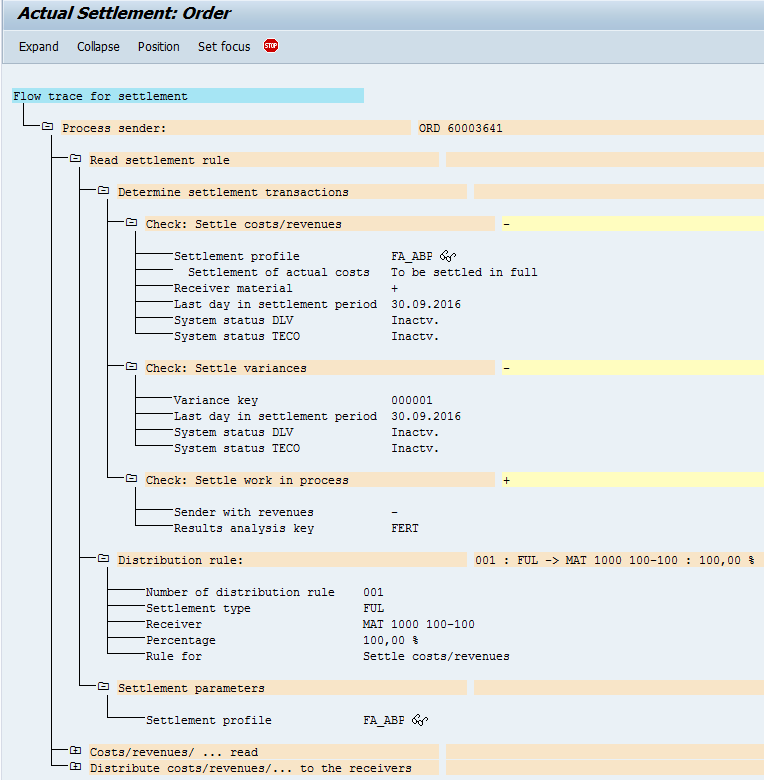 Initially the flow trace shows which sender was processed, in this case order 60003641.

Then the settlement rule is read in three steps:

However, especially important is the determination of the settlement transactions: 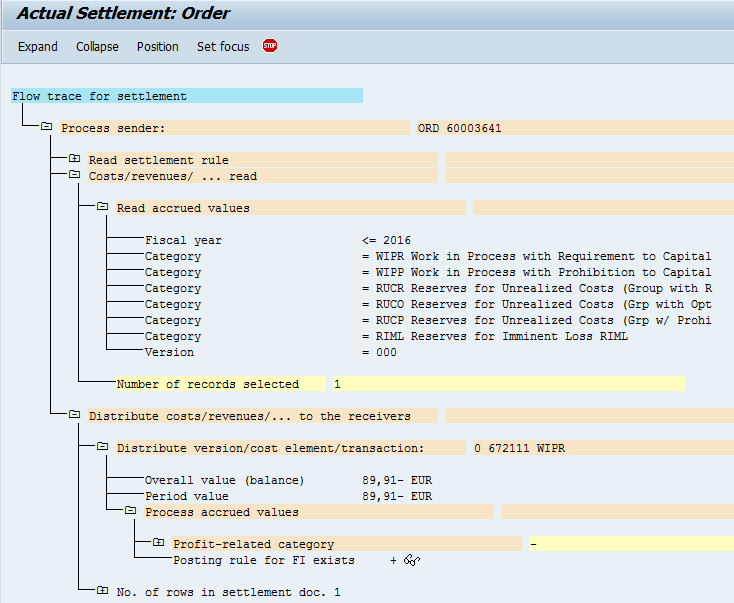 In the database, all the results analysis records in the WIPR, WIPP, RUCR, RUCO, RUCP and RIML categories in version 000 are selected for this order. In total one record is found.

The categories and versions used for selection depend on the settings made in Customizing for WIP calculation. The system only selects versions in the controlling area where the "Transfer to Financial Accounting" switch is activated. Additionally, only categories are selected for which posting rules have been stored in the controlling area (transaction OKG8). All other categories and versions are not relevant to settlement. In addition, all categories relevant to profit are selected on senders with revenues. These are the following categories:  RIML (60), RILC (61), COSR (63), COSO (64), COSP (65), POCL (71), POCR (72) VLRV (75). The description of these categories can be found in domain ABKAT (tab value range) via SE11.

Now the records found are distributed to the receivers individually.

The cost element of the record found by the system is 672111, and it belongs to the WIPR category. The value in the settlement period is 89,91 EUR after the costs already settled are subtracted. The total value of costs not settled during the year for this record is also 89,91 EUR. This value is settled to FI, but is not relevant to profit, since WIPR does not belong to the categories relevant to profit (see above), so the record is not settled to the receiver specified in the settlement rule.

3.3 Example 2: Settlement of a Production Order with Status DLV

When production order 60003641 is settled the question arises as to why the calculated variances were not posted to costing-based profitability analysis. The flow trace provides you with the following analysis: 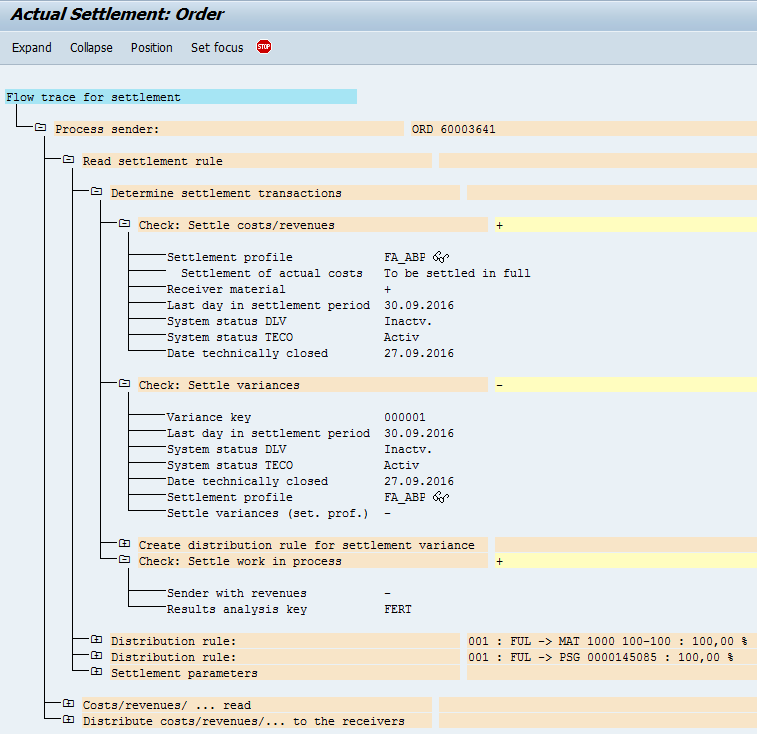 Then the costs are read again, and distributed to the receivers: 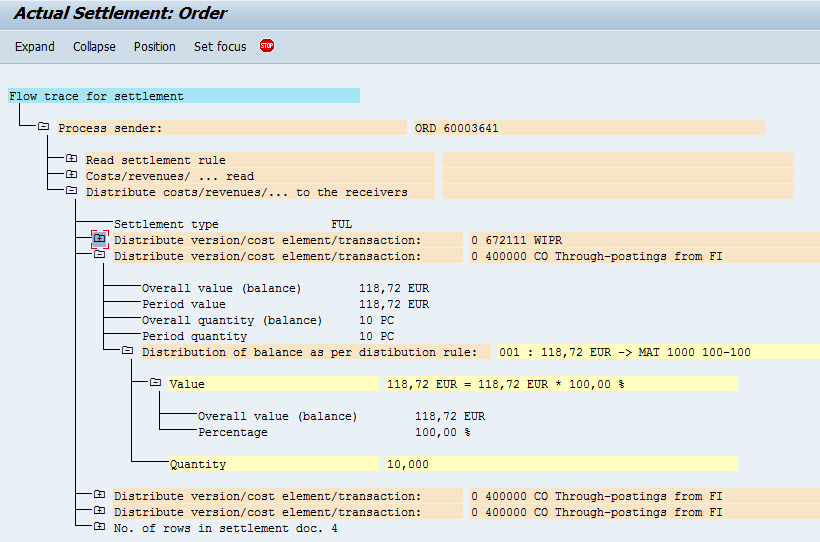 SAP note 28145 provides an overview of the use of the technical validation report RKACSHOW. The following explains how the report can be used especially for settlement.

The settlement rule reads the costs to be settled for an object from the CO totals tables (COSP and COSS). Depending on the settlement transaction, the COSB table may also be important. Please see point 3 "Business Transactions for Actual Settlement" in WIKI article General Information on Actual Settlement in Cost Object Controlling (CO-PC-OBJ). Generally the line items are not important. COSL table contains the delivered quantity for production orders and the billed quantity for sales orders and WBS elements.

For each of the CO totals tables listed above, there is a settlement table in which values already settled are saved as totals: COSPD, COSSD, COSBD, COSLD. In settlement, the costs are read from the CO totals records and then the values from the D tables are subtracted. This result is then settled. See point 4 "Tables updated during Actual Settlement" in WIKI article General Information on Actual Settlement in Cost Object Controlling (CO-PC-OBJ).

You can analyze the tables that are relevant to settlement using the RKACSHOW report. A typical analysis would include the debits on the sender, the settled values, and the settlement documents. The RKA_SETTLE_TABLES_COMPARE analysis report has especially been developed for settlement. This report displays tables relevant to settlement as well as additional functions. To analyze an object, you start it by entering its object number (OBJNR). This object number can be easily found by starting report RKACSHOW for the CO object. It is displayed in the header of RKACSHOW. 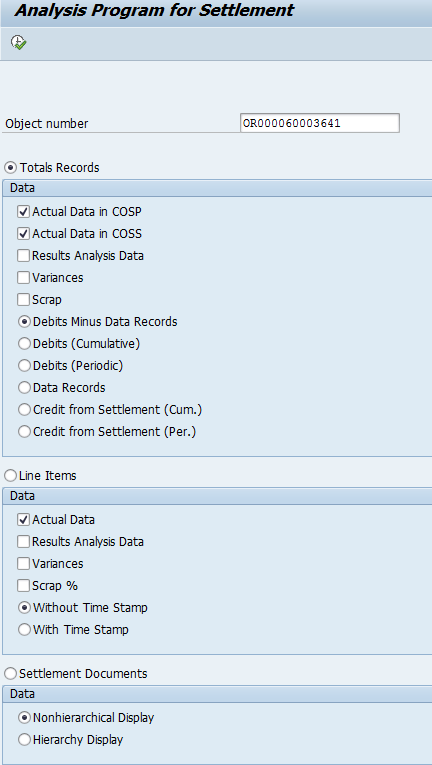 The report provides the following three options, which can be selected using a radio button:

The following explains the analysis possibilities provided by these three options.

You can select one of the following processing functions for this data:

If you suspect that postings were made to the last period after settlement was made, then you should always analyze the line items. The entry date field (CPUDT) shows whether this was the case or not, so if necessary, you can sort using this date.

You can make an initial selection of data that is relevant to you. You can also select more than one data source at the same time:

You can select one of the following display functions for this data:

The settlement documents show which settlement was made for which amount, from which credit record. There are two display options for the analysis: