The system reads the posted line items from the line item table (CE1xxxx, where xxxx = operating concern) according to the selection criteria you specified. In the following, these line items will be referred to as "original line items".

The system determines the new values on the basis of the valuation strategy that was defined for periodic actual valuation. The system creates a delta line item as follows for each original line item found:

The system uses the same characteristic values as in the original line item (NO DERIVATION OF CHARACTERISTIC VALUES). Hence derivation is not called. The purpose of KE27 is only to update the value fields. Values and quantities that were transferred from the sales order or billing document in Sales and Distribution (SD) remain unchanged. Other value fields which are filled using conditions from CO-PA or a material cost estimate are reset.

KE4W customizing is not processed during KE27.

You need to make sure that any value fields you do not want to change are not selected on the Periodic Valuation: Value Fields screen. 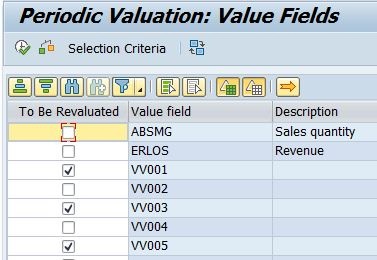 However the 'periodic valuation'-function in KE27 has no effect for conditions that are accessing the material master. Price conditions that are reading the material master can only read the current value or a future value (this functionality is explained in note 62536), so it makes no difference for this valuation method if KE27 will be executed with a posting date of the past or with the current system date. If you want to access historical values by KE27 you can read a corresponding product cost estimate which is of course time dependent and therefore flag 'periodic valuation' would have an effect when looking for product cost estimates.

In general you are able to take over the different ML currencies directly to CO-PA without the need for any conversion. If none of the currencies in the ML correspond to the CO-PA currencies, the system performs the translation on the basis of currency type 10. IF the ML has data available in both company code and operating concern currency COPA simply takes over the values without any conversion. If you want a different system behavior you need to implement the exit in note 1394183 - RKE_EXIT for accessing data of the material ledger.

The cost component split data that is handed over from material ledger to CO-PA can be displayed via transaction MLCCSPD, view (type of price) 'Consumption Price for CO-PA Valuation'. The price which is considered in COPA periodic revaluation (KE27) is the 'consumption price for COPA valuation'. This can be seen in above screenshot.

KE27 will be processed document by document and in case one document will fail due to any error the other documents without errors will still be revaluated.

If KE27 is run before the ML closing is complete then in this case the system will read the standard price view of the ML.

There is no general rule that CO-PA data posted by KE27 will match FI revaluation of consumption data.
This is because in FI COGS will be posted at time of goods issue whereas in CO-PA posting date for COGS is the billing date whereas access data for ML is the goods issue date from CO-PA line item (to get the correct COGS).
So if you have at least one single billing document with goods issue in previous period you will have differences if you compare KE27 result with FI posting of ML closing.
Moreover you are always able to calculate or modify the values in CO-PA within valuation userexit during KE27.

SAP Note 1394183 : RKE_EXIT for accessing data of the material ledger