This technical information is used primarily for training new employees in support and development.

The contents of this documentation are for internal use only and must not be passed on to customers.

1.2 Other Sources of Information

[Define all key words of your topic
If possible, use hyperlinks to the official SAP glossary (SAPNet, alias sapterm).

Transaction currency
The currency in which a document is processed (currency type = 00).

An invoice in foreign currency exists if the currency in the invoice is different from the local currency defined for the company code.

The system calculates the exchange rate as follows:

How these differences are posted depends on how your system is configured in Customizing for Invoice Verification:

When an invoice is posted in a foreign currency, the amounts are translated into local currency. Since the system rounds off the amounts in each posting line, this can lead to rounding differences due to the currency translation.

When no cross-company code transaction takes place and no different tax rate has been used, these differences are posted to the vendor account.

With purchase orders in foreign currency, the postings at goods receipt and invoice receipt are updated both in the order currency and in local currency. The posting amounts in each currency are determined from the PO history independently of each other.

You can also use the Product Cost Controlling (CO-PC) component in your company to manage stocks of materials in several currencies in parallel. This allows you to valuate stocks in parallel currencies based on the actual exchange rates of the transactions causing the change in stock value.

Close relationship between MM-IV and FI and the frecuency of MM-IV problems related with currency, it is very important to know and master these:

First of all, local currency is defined on company level and can be checked through transaction OBY6: 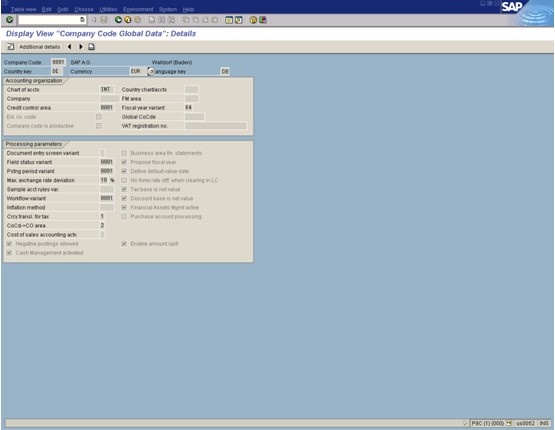 Under this transaction, the role of field "Crcy transl. For tax" (V_001_B-TXKRS) is also very important. It determines how tax amounts will be translated.

Tax amounts are normally translated using the exchange rate prescribed by the tax base amount. If you want to enter or have the system propose a different exchange rate for translation, you have to select the appropriate setting for this option. The alternative exchange rate results in a local currency balance in the document. This balance is posted automatically to a separate account.

The field Max. exchange rate deviation (V_001_B-WAABW) should, as a recommendation, never exceed 10%.

In some countries, however it is very typical to introduce a second or a third local currency. 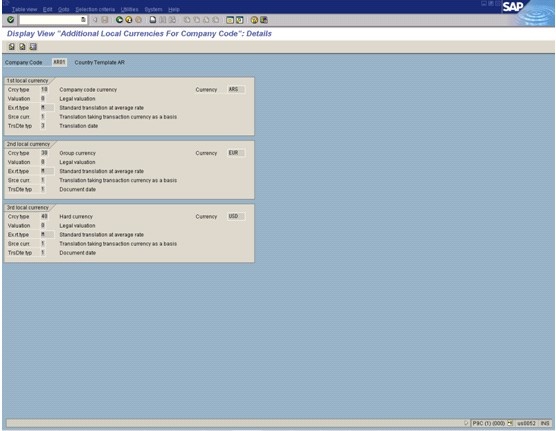 You can define additional currencies per company code which you would like to manage parallel to the local currency. In this case, you can choose between:

The currency type must not be changed for company codes that are already in use.

In customizing it is designated with a 40

In customizing it is designated with a 50

If the CO currency type is 20 and you have not activated a parallel currency in FI, then, in contrast to the usual logic, the system searches in AA for an area which has the currency key that matches the CO currency.

Material inventory values are normally carried by the SAP system in one currency. The material ledger component enables the R/3 System to carry inventory values in two additional currencies/valuations. Therefore, all goods movements in the material ledger are performed in up to 3 currencies or valuations. Currency amounts are translated into foreign currencies at historical exchange rates directly at the time of posting. Businesses such as those in high-inflation countries can therefore carry their inventories in a more stable currency (such as US dollars). This reveals inflationary effects on inventory values.

In order to check in Customizin if Material Ledger is active, please read the following path: 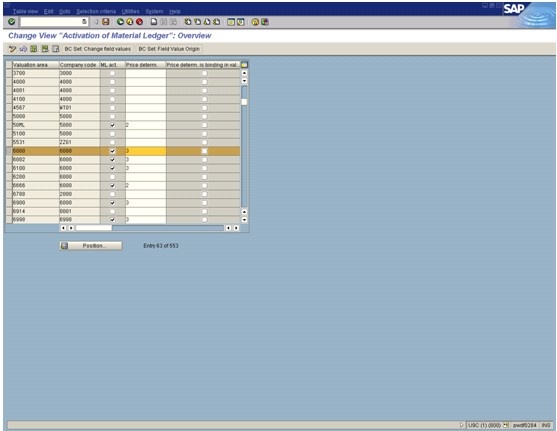 You can activate the material ledger for one or more valuation area.

In the standard system, the material ledger is not activated for any valuation area. 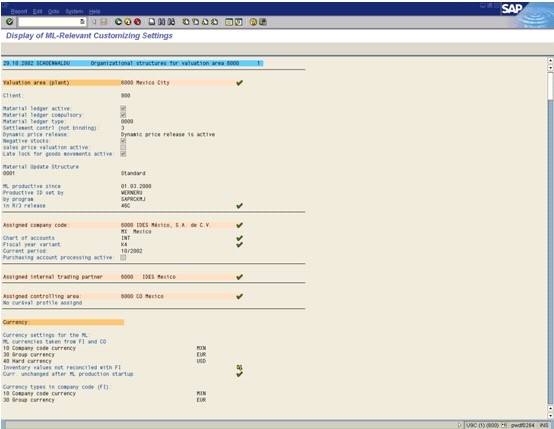 It refers to the exchange rate type whose average rate is used to determine the buying rate. However, the 'Translation date' field (value date) for the foreign currency translation for foreign currency invoices is not an input field in the logistics invoice verification transactions (on the FI side it is possible). In Logistics invoice verification the following possibilities exist: 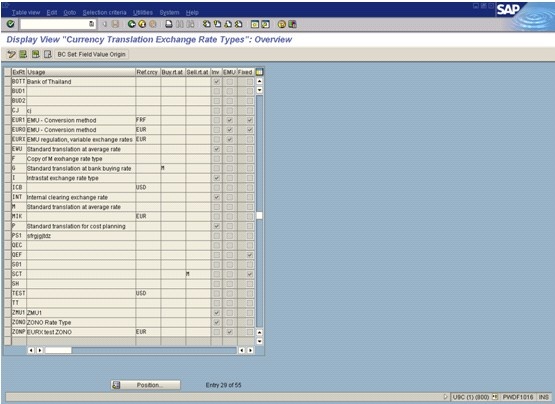 In this transaction you can:

The base currency is USD. You want to translate JPY to GBP. To do this, the following entries must be made in the table for maintaining currency translation rates:

Translation from JPY to GBP is then carried out automatically. The translation is done as though this exchange rate (JPY -> GBP) was actually entered in the conversion table. In this example, the base currency (USD) is the To-currency and JPY or GBP the From-currency.

For exchange rate relations within the EU, it is a legal requirement that the base currency (EUR) is the From-currency. You set the indicator for this in the BCurr=from field.

3. If you want to use the base currency specified as the From-currency, select the BCurr=from field.

4. If you want to use the inverted rate for translating two currencies, select the Inv field.

Note: The reversed rate is used only if you have not made an entry for the corresponding exchange rate in the activity Enter exchange rates.

For the exchange rate type 'M' the indicator Inv is set to 'X'. You want to translate USD to EUR. There is at lest one entry for EUR -> USD, but no entry for USD -> EUR in the table for maintaining currency translation rates. The system calculates the ratio for USD -> EUR from the latest ratio EUR -> USD.

5. If you want to calculate the amounts according to the European Monetary Union's legal directives, select the EMU field. If you set this indicator it means that the SAP System internal translation modules calculate using a different algorithm. The algorithm has been adjusted to meet the European Monetary Union statutory guidelines. The indicator must be set if the statutory conversion rules agreed by the participating countries in the EMU are to be used.

This procedure is not effective if calculation is to be undertaken using bank selling rates, bank buying rates and exchange rate spreads.

If you set this indicator, you must specify a base currency.

The base currency is EUR, the indicator EMU is set to 'X'. You want to translate GBP to CHF.

If the indicator EMU is set to 'X', the system calculates as follows:

Translate the amount in GBP to EUR (ratio GBP -> EUR) -> Round off the result to third decimal place -> translate the rounded amount in EUR to CHF (ratio EUR -> CHF).

If the indicator EMU is set to ' ', the system calculate as follow:

6. If you want the system to check whether the application uses an exchange rate other than the fixed exchange rate, select the indicator in the Fixed field. This indicator must be set for the exchange rate type that is used for currency translation within the EMU. 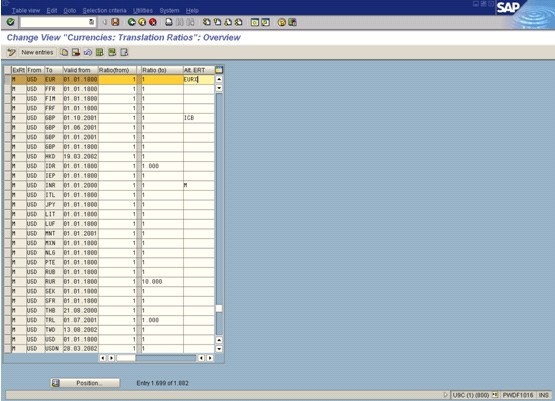 As of 01/01/1999 the exchange rate for DEM to FRF will be calculated via EUR. To translate amounts enter:

Further Notes
The ratios you enter here for currency translation are displayed again when maintaining the exchange rates. For information on how to maintain exchange rates, see Enter Exchange Rates.

Shall errors be discovered in the OBBS settings. Special attention should be paid in the corrections of the values in the transaction. Note 189621 - released internally - includes some data of how to proceed in the case that a customer may face such a problem. 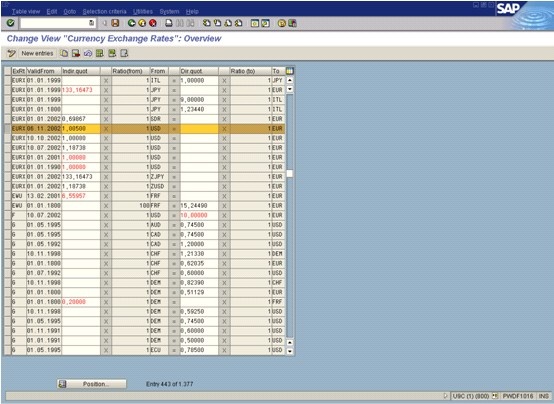 Exchange rates are required to be able to:

The exchange rates are defined by period ("valid from").

The system uses the type M exchange rates for foreign currency translation when posting and clearing documents. An entry must exist in the system for this exchange rate type. The exchange rates apply to all company codes.

The exchange rate relations for currency translation are only displayed here. Read the chapter Define Translation Ratios for information on the actual maintenance.

You have defined the rate types under which you want to store your exchange rates and the required currency keys.

Recommendation
You should delete the exchange rates you do not need. 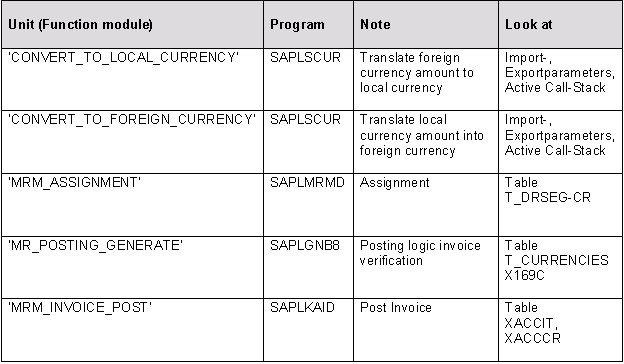 4.2 Creation time of currencies in LIV

Currency informations will be stored in table acccr for further processes in accounting interface.

The following table serves as a guide for the problem analysis in messages reporting currency inconsistencies or unwanted behaviors. In most of the cases, it has to be highlighted, these sort of messages require a deep analysis of the situation and the final solution is an explanation of the behavior of the system. There are very few real errors regarding this matter and the system's calculations in almost every case are precise.

The table can be used as a help to organize the analysis of a currency related problem.