This page was created to clarify the application logic that is used to import release orders from connected system.

As the distributed contract is in a different system, creating a release order for such contract doesn’t update the release order documentation of the central contract automatically. To update the release documentation of the central contract, it is necessary to schedule the import job based on SAP Help page Schedule Import of Release Orders.

Set a breakpoint in the following logic:

System loops at the found systems.

In the loop system checks if this is a local scenario or not. In case of local scenario, system doesn’t need to call the connected system, it just performs a select from EKAB table using Method EXTRACT_CALLOFF_GR_DATA_LOCAL of class CL_MMPUR_CCTR_CALLOFF_UTIL.

In non-local scenario, system calls Method GET_PACKET_DETAILS, which will call the connected system.

Then, it calls method SEND.

In Method SEND, system gathers the relevant driver class based on Operation 2RD and the logical system of the connected system (based on table MMPUR_HUB_API_CT).

In that Method system populates the request URI that will be sent to the connected system and that can be used to continue the debugging in connected system, so make sure you copy that value.

If you don’t receive status code 200 OK in importing parameter LT_RESP_HEADER, it means that the issue is with the connection between the two systems. In case the response is OK, continue to Method PARSE_RESPONSE_TO_TABLE and check, whether the method provides PO numbers (TAG_NAME Purchaseorderfrom, Purchaseorderto) in table ET_RESPONSE_DATA.

If you can find the PO numbers and it is correct, you can continue in this section.

Then press F8 to reach the second breakpoint.

The breakpoint should stop in Method FETCH_AND_UPDATE_CALLOFF_DATA. This method is responsible to fetch the details of the POs that are in the previously determined PO number interval.

The logic loops at the found intervals (internal table MT_REL_ORD_PACKETS) and calls Method SEND to initiate the call into connected system. 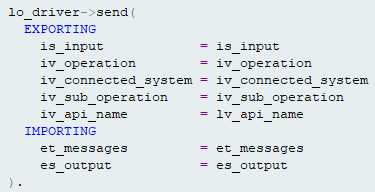 If there is no connection issue and response was received, continue to Method PARSE_RESPONSE_TO_TABLE and verify the PO data in table LT_DATA.

Press F7 until you return into Method FETCH_AND_UPDATE_CALLOFF_DATA. Continue in this Method until you reach Method MAP_ENTITY_TO_HUB_DATA. This method is maps the fetch PO details into the "Calloff" structure that will be saved into DB (internal table LT_CALLOFF_DATA).

In this Method, system performs the DB select. The screenshot is about Purchase Orders, but there are similar logic for GR and Scheduling Agreements. 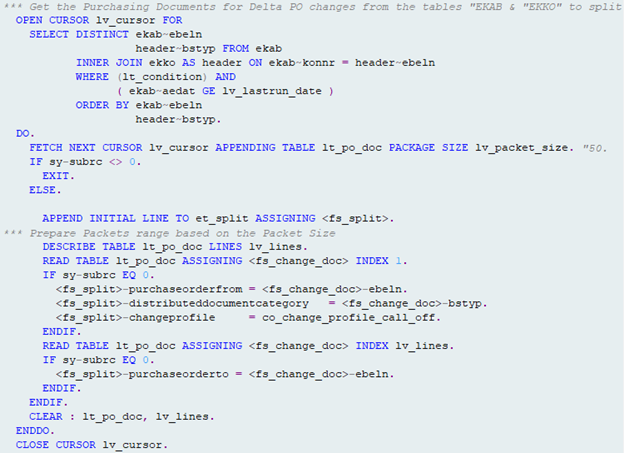 The final result can be found in internal table ET_SPLIT. This contains the document number interval that will be sent to the central system.

KBA: 3157713 Release Documentation is not updated for Central Contract, when PO is created in connected system for the distributed contract