Explain the different modes or types of F4 Input Helps and how these are supported in the flavor editor and scripting.

Modal vs. Amodal F4-Helps and How to Switch Between the Two

There are two types of F4 helps: modal and amodal.

Both types provide the same functionality. The difference is in the user interface, where the most noticeable difference is the fact that the result list of the amodal F4 help is an ALV whereas the modal version shows an ABAP list.

A user can set the type of the F4 help result list in Menu->Help->Settings->F4 Help Tab: 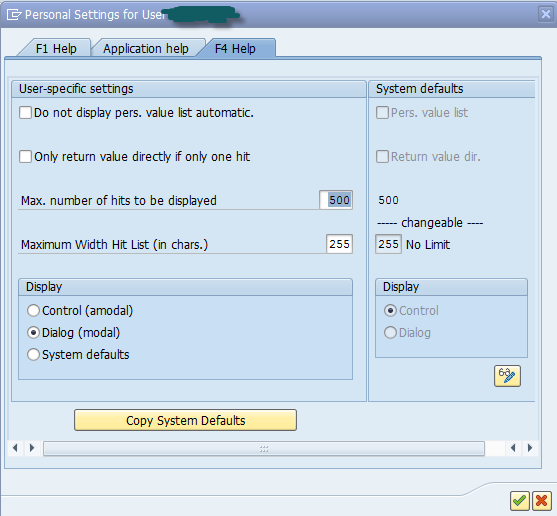 Note: Changed settings only take effect after you start a new session (log out and back in).

F4-Help Support in the Flavor Editor

SAP Screen Personas allows the editing of modal F4 helps.  Amodal F4 helps may not be editable in the foreseeable future. A user whose settings are for amodal F4 helps will just not see the flavor changes made to the corresponding modal F4 help in this flavor.

From SP03 onward, the user's settings will be ignored and only modal F4 helps will be rendered during script execution and script recording. This means that if a script opens an F4 help (via showF4Help()) it will always be opened as modal, thus ensuring that a script will work correctly.

For pre-SP03 systems, the user's F4 help setting is taken into account causing scripts developed for modal F4 helps to fail when executed by users whose settings are for amodal F4 helps. For these systems, SAP's recommended workaround is: Set your user to modal F4 helps during script development and ask the consumers of the affected flavors to do the same. A script author could also check if a modal or amodal F4 help was opened and issue a warning or alert to the user to change their user setting to modal F4 help. Such a test could be created by "session.idExists('ID of control in modal help')" because the control IDs are very different for modal and amodal modes.