The component to be imported is older than the currently imported one.

You receive an "outdated version" error when you try to import a version that you are sure is newer than the version already on the system.

This causes the message

Import cancelled
Reason: The version(s) you want to import are lower than the system state version(s)
It is not possible to import a lower version again 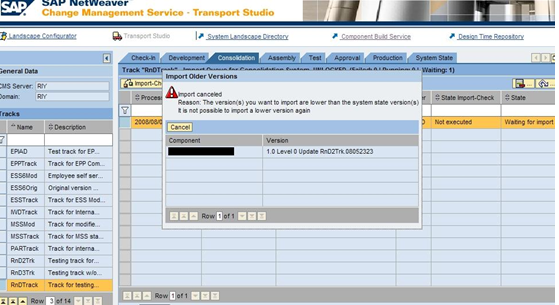 CMS tries to prevent downgrades by not allowing you to import older versions in a track or system. When CMS calculates the one that you want to check-in or import is older than the already present one it will thus not allow it. The similar issue can be caused if CMS tries to sort SCAs belonging to the same SC into an order concerning the source pointer SCA (shown in Details tab) and its source pointer. If it does not find a common predecessor in this it will just compare the time stamps (assembly time, shown as counter in Details tab).

If you are sure that you want to import the version CMS calculates as 'older', please follow SAP Note 973346 (point 4) to remove the information on the 'newer version'.

Be extra careful on the risks and limitations of this action as mentione in remarks on Note 973346 point 4 and please be aware that this has to be done in all locations where you want to 'overwrite' the version calculated as 'newer' by CMS.