Use SAP JVM Profiler for SAP ME Performance Analysis

SAP Note 1783031 explains how SAP JVM Profiler can be used to analyze the AS Java performance. This page illustrates the steps for SAP ME system in particular.

Launch jvmprof from the path of SAP JVM which is used by AS Java (\usr\sap\SID\J##\exe\sapjvm_#\bin): 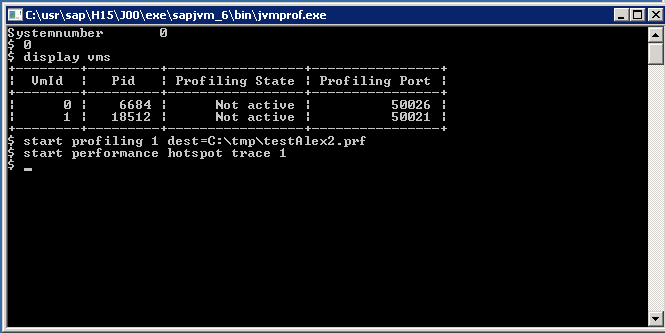 Start the profiling process by executing the following sequence of commands in the prompt. (where "VmId" has to be replaced with the server process experiencing bad performance and "some.valid.disk.drive.path" with some valid path on the file system and profiler_output.prf with the name of the output file in .prf extension):

5. Execute the scenario in SAP ME

Execute the scenario in SAP ME that is causing performance problems. If possible, direct the requests to the chosen server process intentionally.

Stop the profiling process by executing:

You can verify whether some dump was captured by checking the size of the output file.

Provide the output file to SAP Support to analyze it