This Wiki provides an overview of the SAPSprint Service

SAPSprint comprises the program sapsprint.exe which contains the implementation of the Windows service and the receiver for print data from the SAP system. The SAPWIN data stream is processed in the sapwin.dll component. The sapwin.dll component is also used by the new front-end printing, as described in SAP Note 821519. SAPWIN processing errors therefore affect both print methods. Patches for SAPSprint and the new front-end printing are available in SAP Notes 927074 and 841175 respectively.

SAPSprint runs as Windows service. In general, you do not have to change the default configuration settings of SAPSprint as Windows service except for one: You should change the local system account to a domain account. For this, open the list of services in your Windows system, right-click on the SAPSprint service, and choose Properties. On the Log On tab, check the option This account and enter a domain user account.

SAPSprint preserves the features of SAPlpd as a transfer program:

To be able to print Interactive Forms (previously also known as PDF-based forms) on a printer with any device type, you can additionally install the component SAPPDFPRINT. SAPPDFPRINT allows you to address any printer when printing Interactive Forms, in a similar way to using SAPWIN-based device types. SAPPDFPRINT requires either a Microsoft Windows print server with SAPSprint or SAP GUI for front-end printing. More information about this is available in the SAPPDFPRINT documentation, which is part of the delivery.

SAP Sprint or SAP GUI must be of the same release as SAPPDFPRINT.

SAPSprint is a multithreaded Windows service. For every output request to a particular device, SAPSprint opens a new thread.

The number of threads which SAPSprint can start is limited and depends on the operating system.

If an error occurs while printing on a device, only the thread to this device is affected. If the thread is blocked, it remains blocked until SAPSprint is restarted. As a result, jobs sent only to this device will fail until the service restart. However, you can safely print on another device defined in the system as the figure below shows. 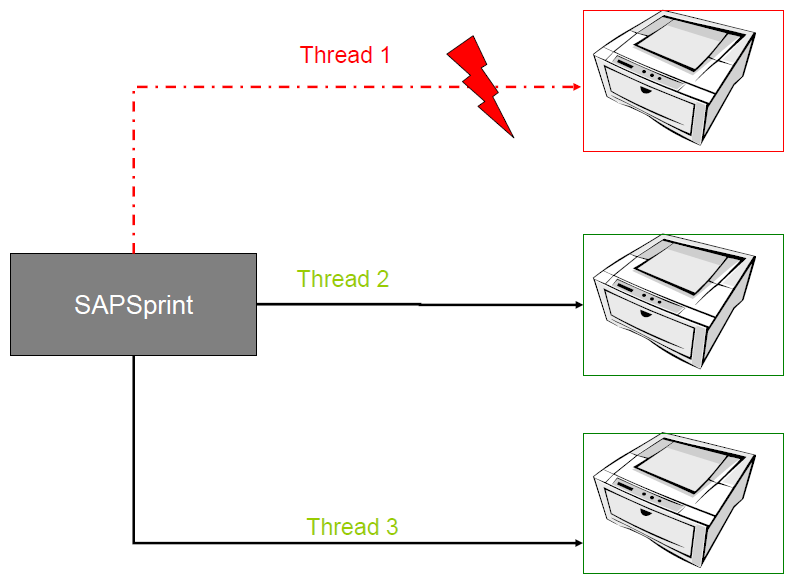 In comparison, SAPlpd has a single process for all output requests. If an error occurs while printing to a device, it prevents output to any other device defined in the system until you restart SAPlpd manually.

SAPSprint is release-independent and you can update it between releases. You install SAPSprint on the print server.

2. When prompted, specify the following:

The value determines the TCP/IP port that SAPSprint waits on. Port 515  is the standard port for printing using the S and U access method. Leave the default value 515 . Change the port number only if the Windows TCP/IP print service is also running on the installation host.

Insert links to any related SAP Notes/KBAs that support your topic or are related. Please hyperlink ONLY SAP Note or KBA number.