Classic object dependencies can be linked to a large number of objects. To do so, internal pointer KNOBJ is stored within
application table of objects (e.g. STPO-KNOBJ for BOM items).

What are the different object dependencies types used for?

KNOBJ is a reference to CUOB-KNOBJ to create a link to the internal object dependecy key KNNUM. KNNUM is assigned to
external name, status etc. by table CUKB.

When a configurable item is configured, sequence of object dependencies is as follows:

When a non-configurable item is configured, sequence of  object dependecies is as follows:

Classification data can be used instead of Selection conditions.

The sequence of actions assigned to a single object is undefined. Sequence of procedures can be defined by user (column
in assignment screen).

Remark: Constraints are executed whenever an ‘input’ characteristic is changed. Constraint execution is not linked to
events or instances.

The typical use case is the configuration of materials in scenario 'sales of configurable materials' in ERP-SD:

'High Level Only' indicates that the type of dependencies can only be used in 'high level' configuration (KMAT).
'Declarative' indicates that dependencies bring their own implicit control logic: no sequence numbers or ordering by the calling application is required;
the result of applying the dependencies is independent of the sort order in which they are evaluated.
Dependencies marked in light grey are called 'classic dependencies'; these are all dependency types with the exception of constraints.
The evaluation of constraints differs significantly from the evaluation of 'classic dependencies' and is not covered in this document.
Actions are classified as 'kind of declarative' because they are evaluated up to 25 times in a loop: in this way output of an action can serve as input to
another action regardless of their detailed evaluation sequence. Running all actions 25 times is, of course, an arbitrary limitation and generally
not too efficient.

Execution of classic OD is done in function group CUOV:

In Low Level an object dependency assigned to the configuration profile is not executed. In Low Level char values can be calculated
for $SELF instance only. Execution is done in function group CULL. (CUDB and CUOV are not used.)   CULL_INIT Initialize new
Low Level configuration and set configuration date.

Variant functions are called from CUFC_FUNCTION_CALL in High- and Low-Level Configuration.

VC dependencies are written in a special dependency syntax using the VC dependency editor (cu01-cu03). The syntax allows
the modeller to refer to other VC master data like characteristics, values, classes/materials.

For classic dependencies, the system stores the following data:

Details about VC dependency maintenance are described in a different handover document.

Generally, VC master data are maintained in separate transactions per object. As of ERP 5.0, the PME VC integrated modelling environment with an
improved dependency editor is available to create VC master data from a model view. Replication of VC master data between different ERP systems
is usually done via ALE (IDocs). A detailed overview of VC data is given in the corresponding VC training classes (LOVC990) and in the SAP Online
Help Portal.

The following tables is meant as a short overview and reminder: 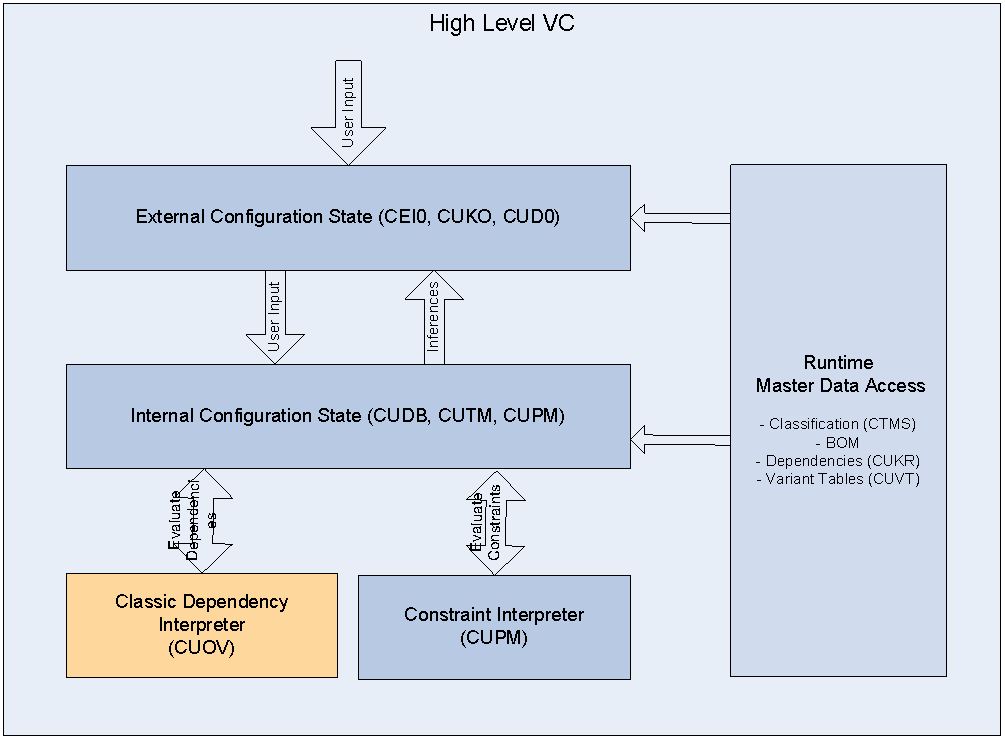 Note: Functions CUOV_EVAL_* are similar to these function modules but are currently not used (no static reference found). They accept the dependency
identifiers (KNNUM) instead of the code tables as input.

Classic dependency evaluation is based on two kinds of input data:

CUOV dependency evaluation functions expect an an input parameter (table) with dependency code. In addition, CUOV has a global memory
with DDB instance numbers for instance variables $ROOT, $PARENT, $SELF to read or write data in the dynamic database during evaluation.
The DDB is managed in function group CUDB which provides access functions to read and write entries in the DDB.

Additional global memory variables in CUOV are the following (see include lcuovtop):

Note: all data in the global memory of CUOV are transient, i.e. they are not saved together with the configuration.
Only trace settings can be saved in the trace modules (CUTC).

The code format of classic dependencies is a binary tree consisting of one or several nodes: each node represents a term. 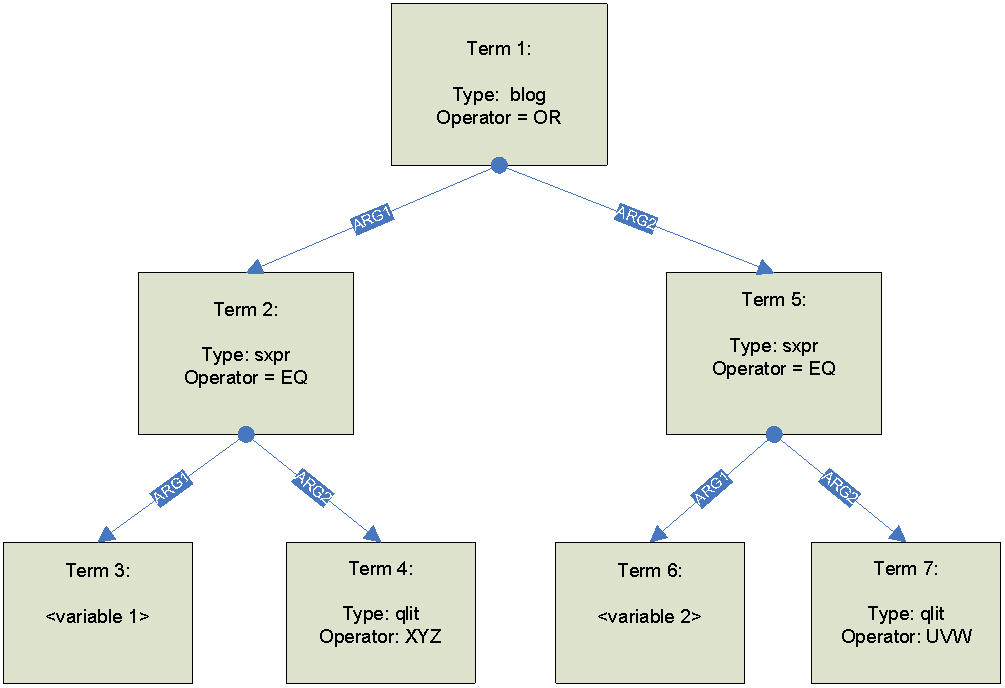 In ABAP, the tree is represented as an internal table of lines with structure KBD_TREE:

The code tree can be viewed by selecting the detailed view of a dependency in transaction cu04 and by clicking the 'Compilation' button. 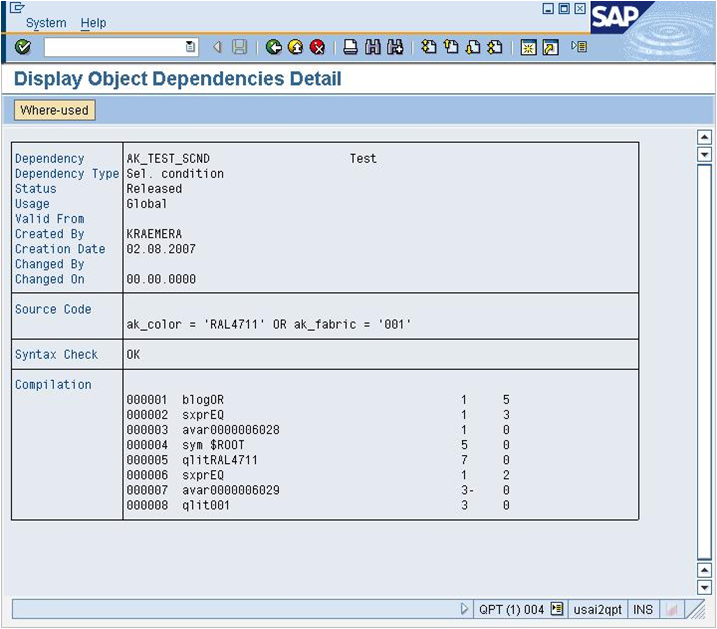 In the appendix you can find more examples of code trees including also other syntax elements.

Note: entries in brackets <..> denote references to other terms in the code tree.

T100 message area: 28. Formroutine for error messages: CUOV_MSG. Global return code variable (CUOVD_RETCODE) is set and an 'S' message is issued.
The message includes the name of the currently processed dependency (KNNAM). Example (28-510): 'Error in dependency processing: division by zero in
dependency &1<KNNAM>'. Messages are also recorded in the application log. They can be displayed via transaction slg1 for object PPVA subobject CUOV.

This section describes implementation details of the dependency processing functions.

Function group CUOV is written in 'old style' (non-Object Oriented) ABAP and can process dependencies against ONE configuration
represented in the Dynamic Database (function group CUDB).

Program SAPLCUOV has the following includes:

The interpreter starts with the root node of the code tree and evaluates it.

Based on the term type, calculating these results requires evaluation of one or several child terms in the code tree. Evaluation functions are generally recursive.

The following table shows evaluation steps for the condition example shown above (Fig. 3.2.1):

Abstract: evaluate a set of pre- or selection conditions.

Comment: A complete 're-evaluation' cycle for procedures includes the removal of all previously known procedure inferences BEFORE calling this function.
The removal step is done in high level configuration using function module CUDB_DEL_ATTRS_BY_KNTYPE (called e.g. in CEI0 formroutine TMS_PROCEDURE).
The removal step is necessary to guarantee reproducible results of the procedure evaluation in case a configuration is checked multiple times.

The steps executed in this function are very similar to the steps in CUOV_DO_PROCEDURE. The following differences exist:

Within CUOV_SET_VAL, a different DDB function is called for actions than for procedures:

Comment: A complete 're-evaluation' cycle for actions includes the removal of all previously known action inferences BEFORE calling this function.
The removal step is done in high level configuration using function module CUDB_DEL_ATTRS_BY_KNTYPE (called e.g. in CEI0 formroutine TMS_ACTION).
The removal step is necessary to guarantee reproducible results of the action evaluation in case a configuration is checked multiple times..
Within a re-evaluation cycle, the same set of actions can be evaluated multiple times because the variant configurator attempts to calculate all
possible inferences from the actions independent of their sort order ('DO 25 TIMES').

This function must be called before calling CUOV_DO_PROCEDURES/ACTIONS or CUOV_CHECK_CONDITION so that the dependency interpreter
knows against which DDB instances it should resolve syntax elements involving the object variables $self, $parent, $root ( e.g. $self.COLOR = 'RED'). 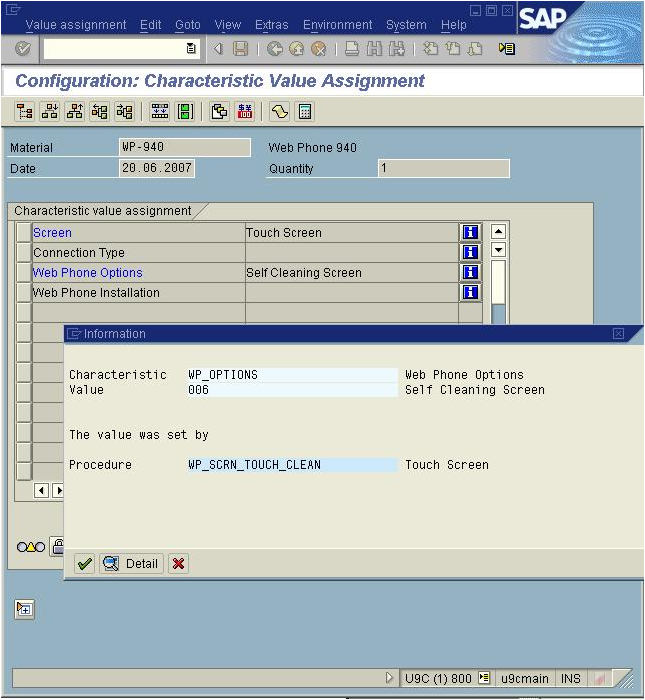 The system will show a popup with all 'reasons' or 'justification's of the value. You can also double click one the of the justifications to obtain
more detailed information like e.g. the documentation & source code of a dependency.

Check the corresponding check boxes in column 1 and activate your selection. In the filter dialog you can specify a list of objects (dependencies)
to which tracing should be applied - this is useful to limit the size of trace outputs in large configuration models.

Perform the configuration steps you want to investigate and then goto menu 'Extras->Trace->Display' to view the trace messages recorded. 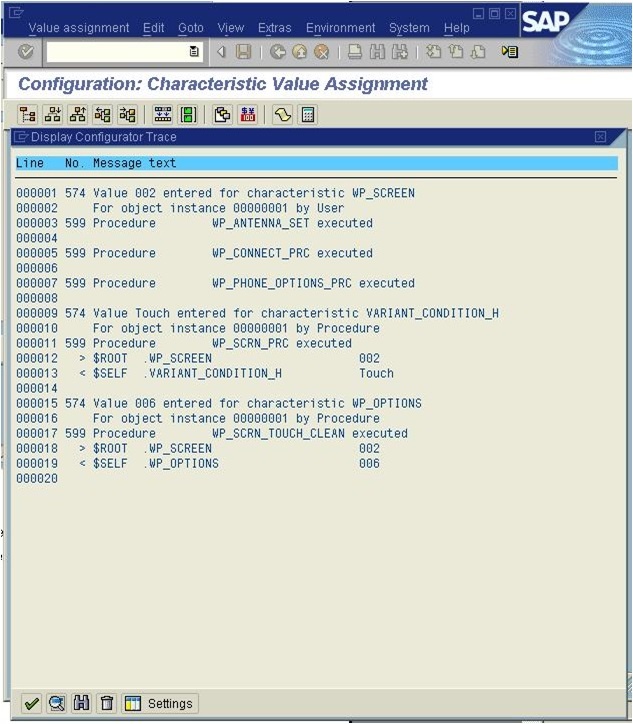 This figure shows a set of trace messages recorded at the 'more detailed' level: the list shows which dependencies have been evaluated and
includes information about input ('>') and output ('>') parameters of procedures. By double clicking on a trace message for a dependency you
can display its source code. Typical errors like missing inferences can be analyzed by looking e.g. at the input values to procedures and
actions in this list.

Messages about serious errors like corrupt code or zero divisions encountered during dependency evaluation are written to the application log
using function module CUTC_WRITE_APPL_LOG. These messages can be viewed in transaction slg1 for object 'PPVA' and subobject 'CUOV'.

If you want to filter to a particular dependency, you can also switch on filtered trace for this dependency and place a break-point
in CUOV_CHECK_KBAU_TRC on the line with CUOVD_KBAU_TRC_ON = TRUE.

The following table gives an overview of OSS notes about classic dependency evaluation. Main component for notes search: LO-VC-DEP. Keywords: SAPLCUOV
Priorities give the author's personal view of how important a note is (1=very high, 2=high, 3=medium). Prio = MOD indicates modification notes. OSS notes with
numbers <500000 are usually old and should be available in most customer systems.