Some things to know about the import and multiple main tables.

MDM Import Manager is able to import data for a single main table only. It is not possible to create an Import Map that targets two different main tables in one import run. There is a stricit 1:1 relation between an Import Map and its destination table.

Nevertheless it is possible to import data for fields that are actually lookup fields to either the same or a different main table of the repository. The following paragraphs show how this can be achieved. The screenshots shown on this Wiki page are all based upon the SAP MDM Vendor repository (check the related SAP Note for details about the repository!). 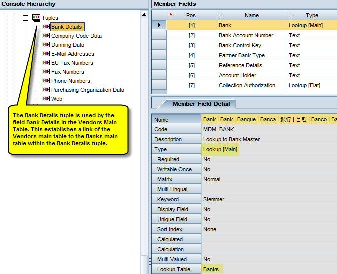 Second, it is mandatory that the main table you want to use as lookup table is enabled for Remote Key Mapping. If this is not the case, you cannot import the lookup main field values in MDM Import Manager. Currently the remote key is the only value that is usable in MDM Import Manager for identifying the record that should be used as lookup.

Coming back to the Vendor repository, there are a few Banks available if you use the Sample Data that is delivered with the Business Content Package. As soon as you have initialized your repository, the Banks main table will look like this: 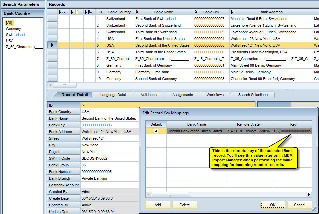 The selected record Second Bank of the United States already has a remote key - all other records have remote keys, too.

Setting up the Import Map

In MDM Import Manager, you need to create an Import Map for the Main Table that contains the lookup main field. Following the Vendor example, the Import Map _CREMDM04 imports records from the CREMDM04 IDoc into the Vendors main table. Use the sample data file _Vendors_from_ERP.xml if you want to follow the screenshots.

Next to several more field mappings the Import Map feeds the Bank Details tuple, too. The source values are part of the E1LFBKM IDoc segment. Navigate to mentioned segment/field mapping and have a look at the related value mapping:

The Destination Values pane shows the existing Banks of the Vendor repository. The mapping indicates that one of the Vendor records to be imported is using the Second Bank of the United States as its bank.

Usually it should not be necessary to perform the value mapping manually as it is based upon remote keys and thus should be done automatically by MDM Import Manager. If the mapping is not done, use the Automap button. MDM Import Manager is able to identify and map the records by comparing the incoming source values with the existing remote keys of the destination values. It is mandatory, of course, that the source values are the actual remote keys of the existing records.

Result of the Import

As soon as you have successfully imported your records, switch to MDM Data Manager and locate the record using the Second Bank of the United States. To speed up our search, it is Vendor number 6, Paper Inc. Locate the Bank Details tuple and jump into its details by double-clicking it. You'll see the following result: