The purpose of this page is to explain the settings available in Admin Center > Nominations Set Up page.

The Nominations Set Up page in Admin Center allows administrators to select a few options that relate to how nominations are treated throughout the Succession module. 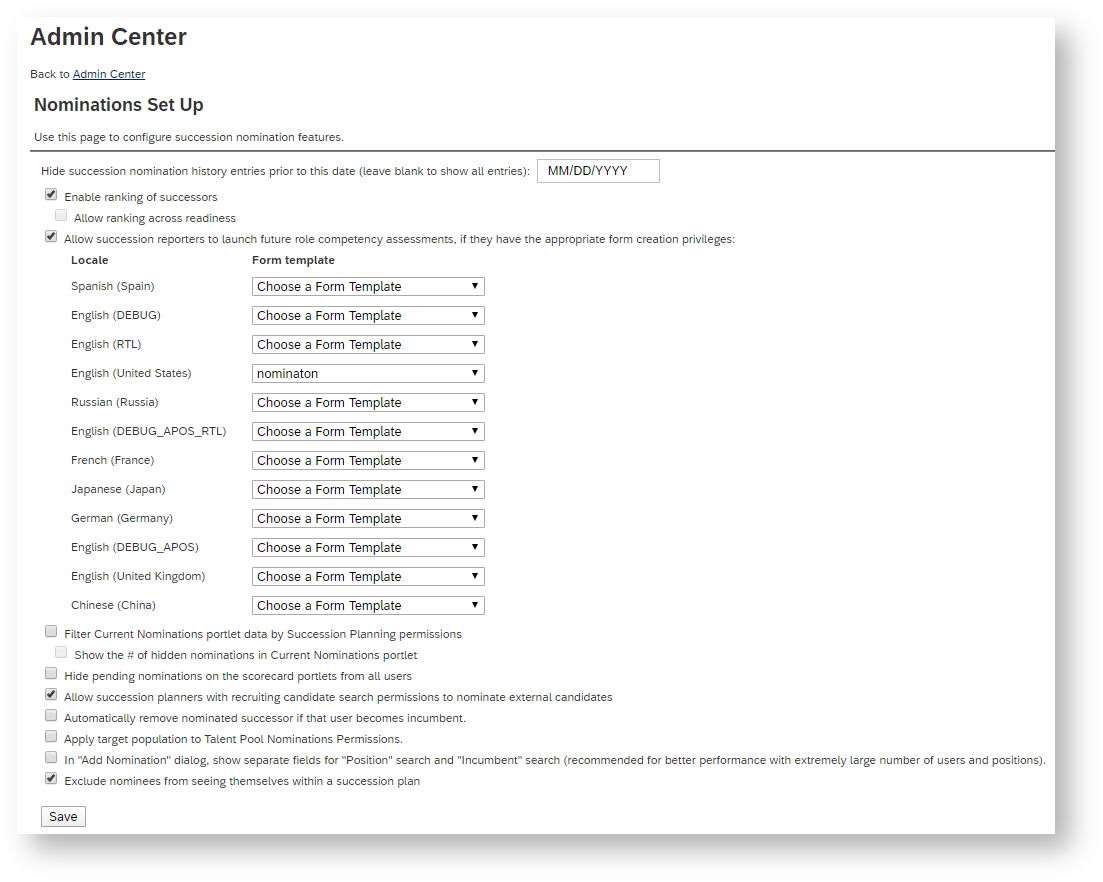 To apply this configuration, just select a date for this option and click "Save". After applying this setting, all historical nomination data that displays in the Nomination History dialog in the Succession Org Chart will be subject to the condition that, if it was entered/modified before the defined date, the historical entry will not be displayed.

This option enables a "Ranking" field for the nominations, which is a numerical indicator to allow a second level of sorting for the successors, besides the standard "Readiness" value. This field will also become available when adding successors via the "Successor portlet", "Nominations portlet", "Talent Search" and "Import Successors". See below example on how it looks like in the Succession Org Chart: 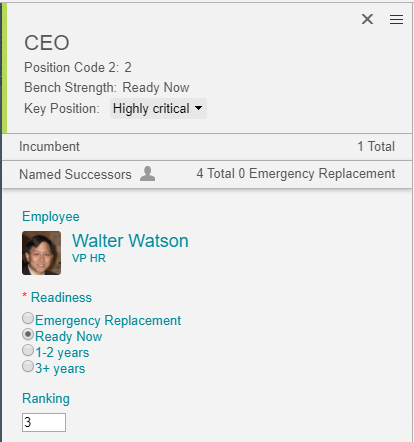 The standard behavior is that Succession will then start sorting the nominations based on the "Readiness" level first, and then by "Ranking".

For more information on this feature, refer to the section Layout and Display Options - Sort Successors By of the Wiki Page Succession Org Chart v12 - Functionality Overview.

As of b1908, the sorting of successors (by readines and by rank) in Succession Org Chart is now applied to other areas of the application: Presentations, Position Tile, and Lineage Chart.

If this option is enabled, Succession Planners will be able to launch Competency Assessment Performance Forms for successors on the competencies of the position they have been nominated to (their future role). This option will only be available for Succession Planners that have the appropriate "Permission to Create Forms".

To use this option, you'll need to select a Competency Assessment Form Template (which should contain a section to evaluate Job Specific Competencies) for the desired locales (languages).

With this option, when clicking to edit a nomination in the Succession Org Chart, users will also see the "Evaluate Readiness" option. Clicking this option will open a pop-up window for the user to launch a Performance Form with the position's Job Role as the target Job Role of the form, which means that the Job Specific competencies evaluated on the Performance Form will be the one's associated to the target Position's Job Role, and not to the Job Role of the successor. For this to work properly, a Job Role must be associated with the Position (either based on the incumbent's Job Code or on the Position's Job Code, if enabled in the Position object for some MDF Position configurations).

Show the # of hidden nominations in Current Nominations portlet 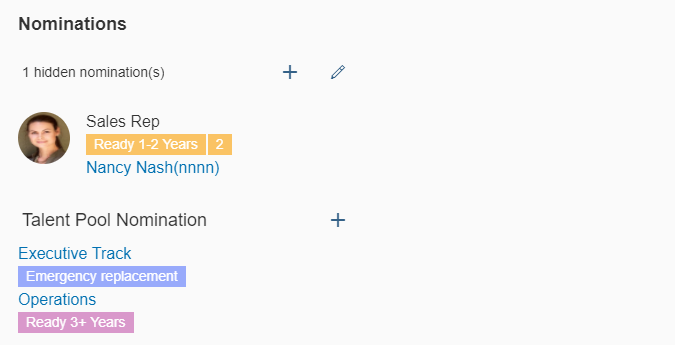 Hide pending nominations on the scorecard portlets from all users

If enabled, the pending nominations will not appear in the Nominations and Successor portlets.

Show all the families and roles in browse nomination tab

In the Nominations portlet, it is possible to select a position by using a text search box or based on a Families > Job Role > Job Code > Position list (tree), available in a Browse tab. If this option is enabled, all the Families and Roles will be displayed in this list, even if there are no positions available (associated to the role).

In the example below, the Job Role "Manager" and Job Code "MGR" appear in the list, even if there are no Positions associated with the role to be selected. 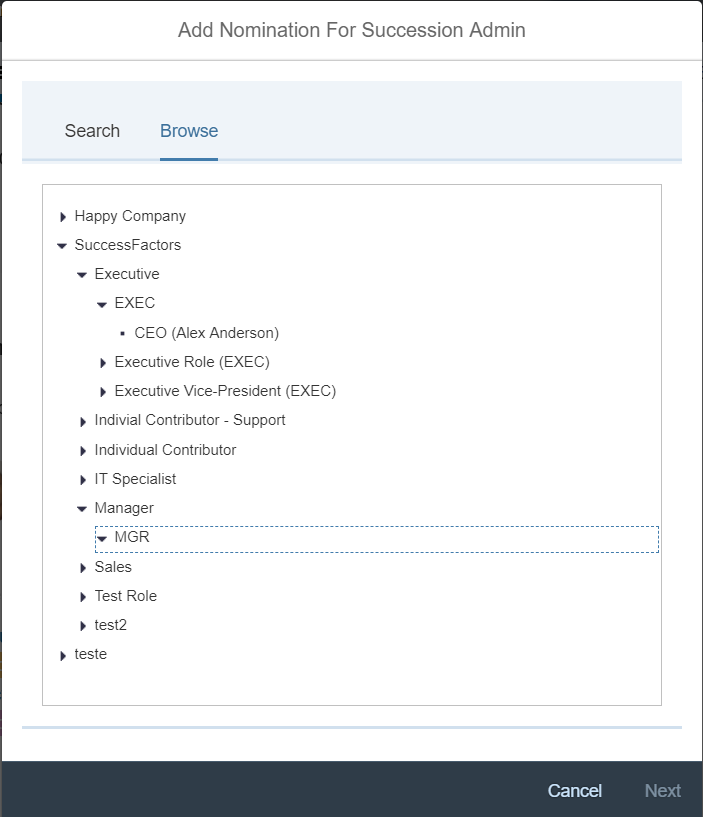 With this feature, when an employee, who was nominated as a successor to a position, actually becomes the incumbent, the system will automatically remove that employee from the successor list for this position. This enhancement automates the process of identifying successors who become incumbents and then removing them from the successor list. By selecting this option, you can optimize your succession process and relieve your talent planners of the manual steps otherwise required. 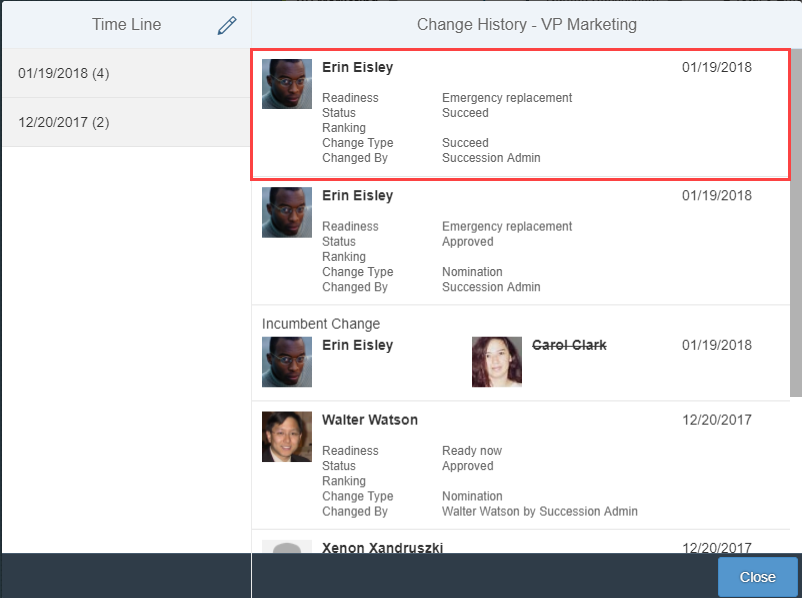 This option is only available for customers using MDF Positions and it serves the purpose of improving the performance of searching for positions in the "Add Nomination" dialog from the Nominations portlet. By default, the "Add Nomination" dialog will accept the first name, last name or position title of the target position or incumbent and search based on those attributes. If this option is enabled, you'll have the option to search based on the incumbent or on the position separately and this helps to speed up the search for customers with many positions. For more information on this option, refer to SAP KBA 2445271 - Succession Management - Slowness in search field from Add Nomination dialog. 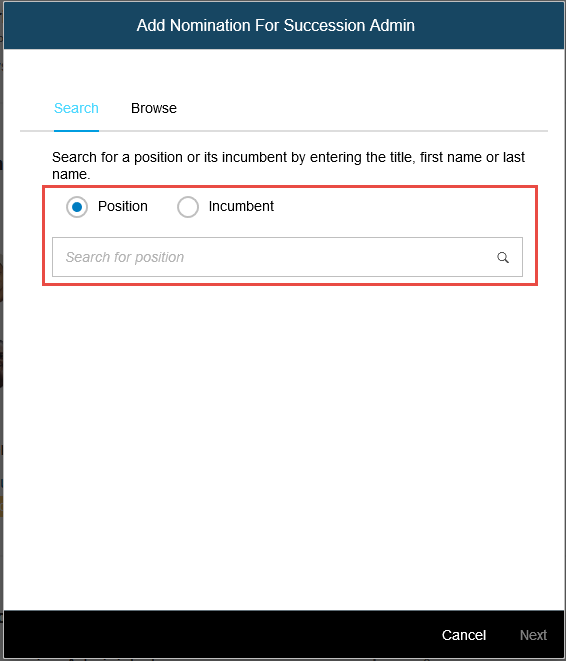 Exclude nominees from seeing themselves within a succession plan

This option was added in b2005 release where it gives the admin an easy way to remove access and visibility to nominations of logged in user to all Succession Position nominations without going through the delicate process of removing access to user through RBP.

In customers’ HR departments in each business line, there are users who are responsible for Succession Planning for this HR department. However, those users should not see themselves as a successor. Otherwise, they would know their competitors for a position nomination. Therefore, it is necessary to provide a permission flag to exclude self from the succession planning.

Note: This is only applicable to Position Nominations. For Talent Pool Nominations, logged in user's self will remain visible.

After 2H 2020 nominees who have been nominated as Successor will not see themselves in the Successor list that is returned by the OData API entity Successor. The enhancement was built to keep consistency between the setting in Admin
Center and OData API. You can use the Successor entity to query basic information of Successor in succession planning module. Ref Enhancement: SCM-14361