Upgrade:
In simple words SAP Upgrade is nothing but upgrading the software with a superior version which has got more advantages when compared to the earlier version. This activity involves various phases and sub-activities.
After the initial upgrade happens, we have to do adjustments from SPAU/SPDD to maintain or reset the changes. That is, from the list of objects in SPAU/SPDD, you have to either carry forward the changes to the new version, by choosing the option ADOPT CHANGES (available on right click) or RESET TO ORIGINAL (available on right click). In this article we will be concentrating on SPAU activity and how it is processed
during the upgrade
SPAU (adjustment of repository objects)
SPAU is an important activity during the upgrade process( which processes SPDD, Unicode conversion etc. alongwith SPAU). During an upgrade or the import of a Support Package, existing objects of the SAP standard are overwritten with the objects redelivered. To help the customer retain the objects modified in a previous release, SAP provides all modified objects which are redelivered (in an upgrade or Support Package) in the upgrade adjustment of transactions SPAU and SPDD. Repository objects are adjusted using transaction SPAU.
The various steps followed during the SPAU which in turn facilitate customers to enter their modifications into the corresponding new objects being delivered at upgrade are described as follows:
Steps

1)  Enter the SPAU transaction, the screen will look like below.

To restrict the display of the objects in transaction SPAU

Use the checkboxes of the tabs in the lower part of the screen.

Once we enter the transaction we would encounter the following screen (after the initial screen) with all the objects which require the action to be taken.
The Objects will appear in any of the three categories:
1. Note Correction
2. with Modification Assistant
3. without modification Assistant
For the adjustment of the notes listed the following steps are to taken:-
-          NOTE CORRECTION: STEPS  2) Open the "Note Correction" section. Expand the node. 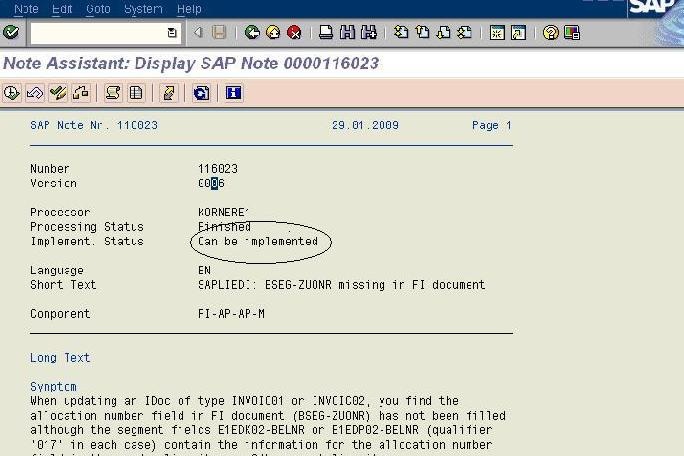 Then you have to download the latest version of the SAP Note. This can be done by pressing -Shift F7.
2.2) Use the Check functionality (Ctrl + F4) to check whether the note can be implemented or not.
If the note is applicable and can be implemented, press "execute" and thus apply the note. Once we do it we will get a pop up message to confirm the implementation, reply 'Yes'.
2.3) Assign it to the concerned CTS
2.4) The following screen will appear. Please take care that you should proceed further only when you get a green light in all the lines. Even if one of the line is not green, please don't go further. Please exit the implementation of this Note. If all the line are green, the proceed.

2.5) Note has been successfully implemented. This note disappears from the SPAU transaction and the changes will be added to CTS.
CASE: If the Note status is "Cannot be Implemented".Then following steps should be taken. 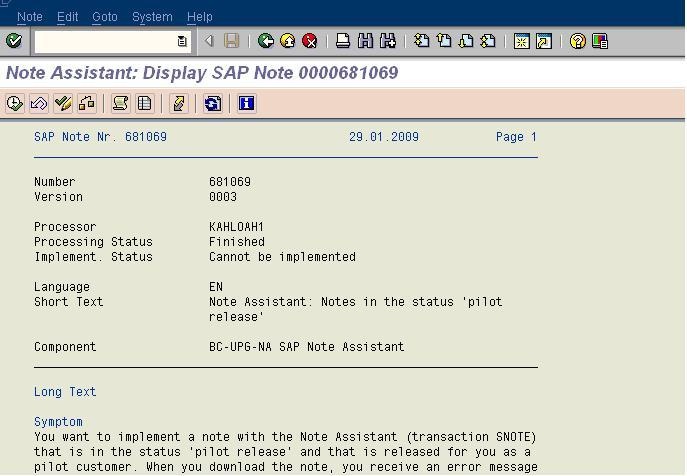 2.6) click on the traffic lights, upon which you will get a message as follows:-

2.7) Clck reset.
2.8) Add to the CTS.
Along with the note corrections node we have two more nodes under objects are placed, naming,
With modification assistant.
Without modification assistant.
Before we go into details about the processing of the above nodes in SPAU activity we need to familiar with the following terms:
RESET TO ORIGINAL:
When we choose an option of resetting the object to original , it basically infers that we are reverting it back to the standard. This is done when we don't want to adopt any customer modifications which have been applied to the objects.AfterReset to originalthe objects are removed from the tree display of the Modification Browser (transaction SE95) and of the modification adjustment transaction (transaction SPAU).

ADOPT MODIFICATIONS:
This option is contrary to the "reset to original" option. when we choose to set the object as "adopt
Modifications" , we are accepting the customer modifications performed to the concerned object.(according to requirement).

Version Management :
Version management is a vital aspect of the SPAU activity.The plan behind this aspect is that SAP maintains all the changes which have been done , and keeps track of all of them through the maintainence of versions.Every standard or non-standard( customized change ) is recorded.We have a facility of comparing the versions which have been associated with each and every object in the SPAU list.This further gives us an option of deciding of whether we want to adapt to the changes (adopt modifications) or just revert back to the original version ,standard version(Reset to original).
-        The version overview distinguishes between the versions in the development database (Repository) and the historical versions saved in the version database.
The development database contains the active and/or the revised version.
The version overview also displays the date and time when the version was created and the corresponding release.
If a transport request is specified for a version in the version database, then this version corresponds to the status of the object:
-        When a request is released and this request is from the current SAP System
-        After a request is imported and this request is from a different SAP System
If a request is specified for the active or revised version, then the object is currently being processed in the context of this request or it was imported using this request.
3.WITH MODIFICATION ASSISTANT:
For objects under "WITH MODIFICATION ASSISTANT" node analysis should be done as to what changes have been done to the respective object. Below points explain various possibilities and action to be taken.
3.1) PROGRAMS
Orange Status
Orange = Inactive version is most recent If the object is in orange, then it will:
-        Need an object key
-        has syntax errors
Action - Get key from Basis and activate object (prompt in generation screen)
3.2) SCREENS
Do nothing regardless of status
3.3) PROGRAM TEXT
Revert to standard (Reset to original)
3.4) INCLUDES
For includes do as following:
Double click on the Object Name
UtilitiesàVersionsàVersion Management 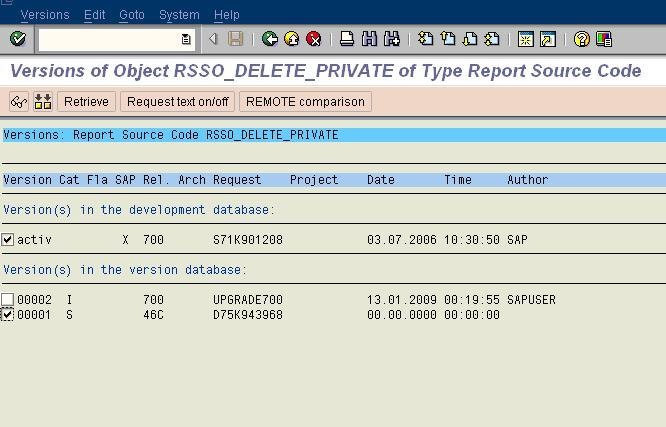 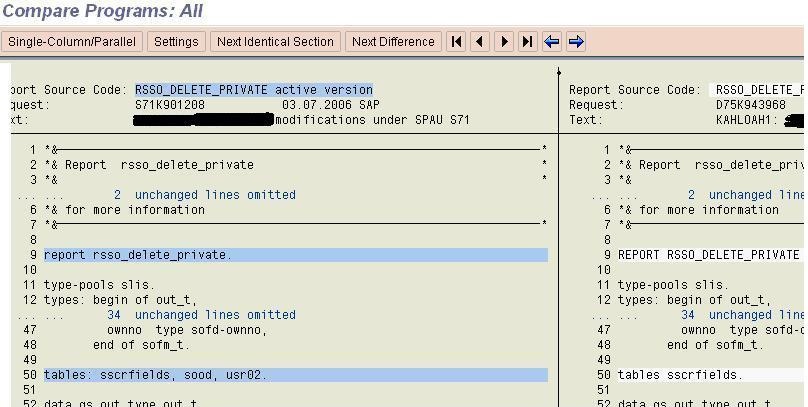 Visually compare the 2 objects and reset to standard only if
1.                  There are additional comments but the ABAP code is the same as in there is no customer modification (z- functionality)
2.                  The right panel code contains the same but less code entries than the left. In other words, if the left panel contains new code and the code on the right is already included, return to SAP standard.
If the above criteria is not applicable , no action is to be taken.

3.5) FUNCTION GROUPS
A.Function Modules: same rules as Programs.go ahead as in case of programs.
B.Screens: compare the active version with the most recent 4.6C version.
C.Data Elements. same as above.
Hence like this we can compare the versions of various objects and adjust them accordingly.

For objects under "WITHOUT MODIFICATION ASSISTANT" node analysis should be done as to what changes have been done to the respective object.The method of doing this more or less the same as objects under "with modification assistant".Below points explain various possibilities and action to be taken.To adjust objectswithout the Modification Assistant, use version management wherever possible. When modifying objects where version management cannot be used, carefully document any changes that you make. This documentation can be of great assistance the next time the object needs to be adjusted.

As shown in the screen shot below: 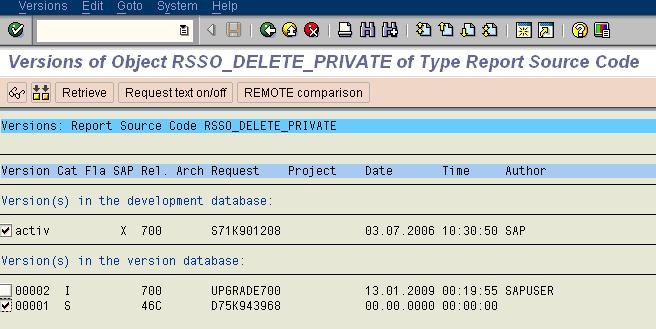 So these sum up the main processes and steps involved in conducting SPAU activity during the upgrade procedure.
Hope this proves to be useful to all the people referring to it.Suggestions and add-ons are most welcome.