This wiki aims to help the analysis of semaphore lock or waits situations due to deadlocks or even slow operations inside of operations protected by semaphores.

It cannot be and does not aim to be a complete documentation describing all possible semaphores issue scenarios.The main idea is to show you the traditional troubleshooting process in a semaphore lock and wait situation.

The most frequent problems involving SAP semaphores could be classified as:

The first situation will stuck the system and users cannot even login to the system.  Usually, such situation may affect a single Application Server but it is also possible that the entire system is affected.
The second issue is a similar situation, however, the system is not really stuck. The operations can take long time, but the work process status change time to time and the semaphore locker change as well.

The content here is separated in the following sections:

The work process locker (semaphore locker) is the responsible to stuck the system, it may lock the semaphore forever or during a specific time span. 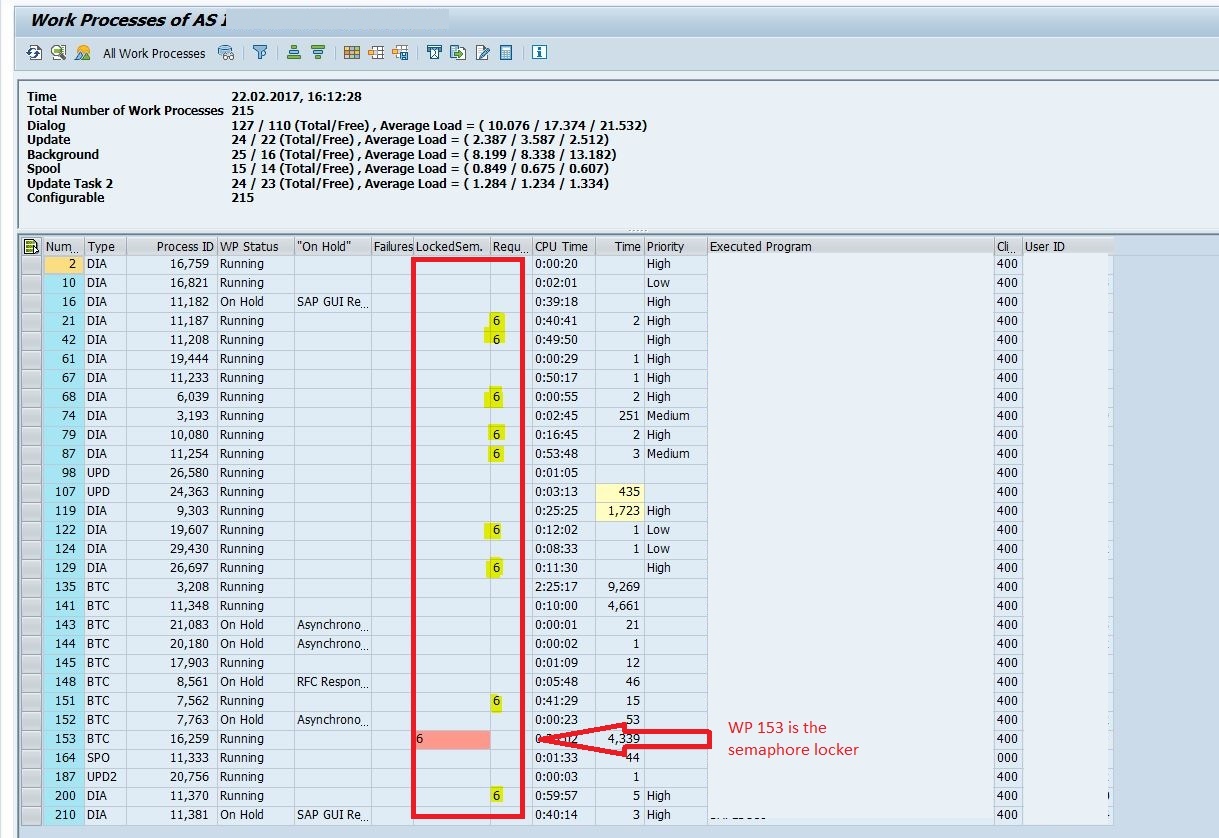 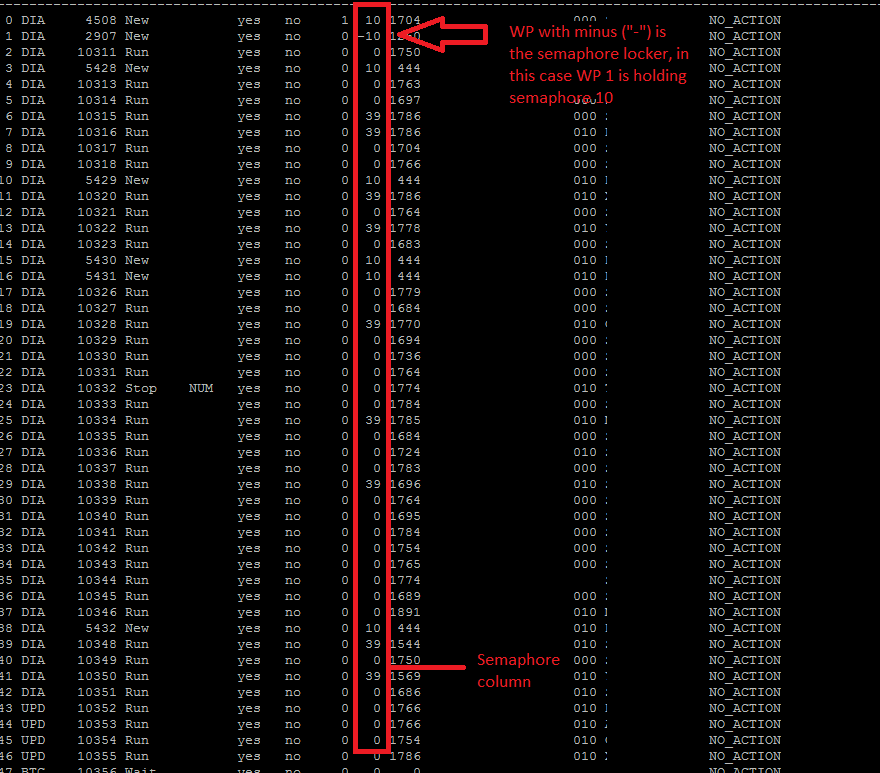 If the column time that belongs to the semaphore locker keep increasing or already running reached a long time, it has a big possibility to be a semaphore
deadlock situation. However, if the column time is close to zero or just few seconds, may be just a slow situation.

There are situation where the semaphore locker cannot be identified, for these cases you can use the semd tool as explained in the note 2027885.

The first thing to do is define if it is situation is the case 1 or case 2 based in the behavior's analysis..

In case of a semaphore deadlock or stuck lock, it is possible to restart the work process locker and, that may solve the issue. If the issue is a stuck lock situation,
the WP restart may solved the hanging situation. It is possible that a new WP stuck the same semaphore again, therefore, just the restart will solve.
However, if for some reason, the semaphore cannot be properly released, the only solution is the restart of applicator server.

In case of the second situation, it is need to identify the reason that the work process are holding for too long the semaphore. This issue may belongs to distinct situation
like problems in the file system, a long runner operation from OS level, shortage of resources at OS level, etc.

There are multiple reasons that may lead to a semaphore deadlock, stuck semaphore or even slow down lock situation.

The deadlock or stuck semaphore usually is related to an error, basically, if a WP is accidentally interrupt and it is at a point when the process hold a semaphore, the release may not occurs as expected:

In the other side, situation of slow operation protected by a semaphore, the error does not exactly occurs with the semaphore manipulation. But the operations between the lock and unlock the semaphore are taking a long time.

In both cases, the analysis should be done collecting the C-stack of the work process during the occurrence of the problem.

Calling "sapstack <PID>" during the occurrence of the issue will print the c-stack of the process. Another possible way to do that is using a signal USR2 to the process ID: "kill -USR2 <PID>" will print in the work process trace (dev_w*) the c-stack. There is no "kill" command on windows, therefore, it is possible to use "sapntkill -USR2 <PID>". After send the signal USR2, it is required to send a signal USR1: "kill -USR1 <PID>".

How to analyse the c-stack

The call stack should be analysed from bottom to top. To find out the root cause the most relevant calls are the last ones before the signal. See the following example:

You probably are wondering what to do with these call stacks. The most important thing is to use these stacks to find out in the SAP knowledge repository about a known issue involved the same or most similar call stack. You can search the most relevant calls inside of SAP knowledge repository by some known issue involved the respective calls in order to check if your system is affected by the issue or not.

INCLUDE WHERE TO SEARCH

It not possible to provide you with an specific solutions about problems regarding semaphores because the root cause may have distinct reasons, therefore the analysis process is the most relevant item in such kind of cases.

How to prevent the situation

There are some specific situations, with kernel 72X, where the semaphore can be automatically recovered with the feature of note 1890657.