When operating an SAP system landscape, there might be situations where you want to rename an existing SAP system. For example:

With the system rename procedure being offered as option in Software Provisioning Manager 1.0 and 2.0, change the hostname, instance number, or system ID (SAP system ID or database system ID) or any combination of these parameters of an existing SAP system based on SAP NetWeaver 7.0x, SAP NetWeaver 7.3x, and SAP NetWeaver 7.4. These changes have officially been possible only by performing a homogeneous system copy.

As a consequence, the system rename procedure can enable a faster system copy procedure for certain scenarios, as it allows to quickly adapt key characteristics of an SAP System or to make cloned systems operational (for example, you can use system rename to configure a system that has been copied to another file system along with services, users, permissions, and hostnames to be operational on the new host).

The system rename procedure is performed on the primary application server, while additional application server instances have to be re-installed. See the information below for further details, prerequisites and constraints (such as supported releases and use cases on your platform).

System rename is provided with Software Logistics Toolset 1.0 as part of Software Provisioning Manager 1.0 and 2.0. 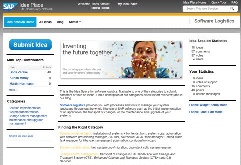