This page is to explain different settings and restrictions in the RFx Outside Firewall scenario.

In the RFx outside firewall scenario the contact persons of the bidder are not allowed to access the SRM client. The company purchasers are working in a different client and different system (often called as 'buy side') than the users of the supplier/bidder company (often called as 'sell side'). In the RFx outside firewall scenario, contact persons can be created in both SRM (buy side) and SUS (sell side) system as well.

In case the contact person is created by the SRM purchaser on the buy side, you have the option to:

After you create the contact person, the user data are transferred to the sell side over the following XML interface:

The SU01 user is also visible in PPOSV_BBP transaction: 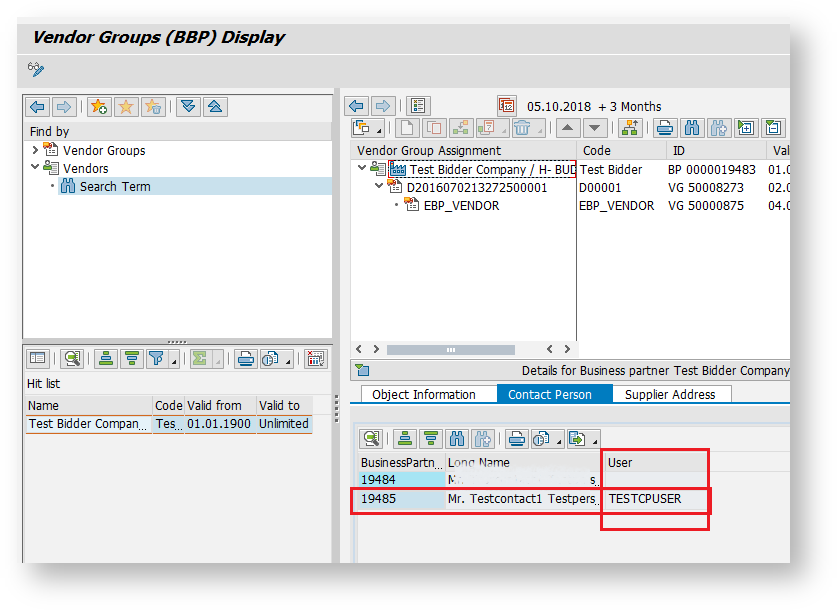 If the contact person is created in the sell side, it is replicated back to the buy side using the same xml interfaces, however, with an important difference: no SU01 user is created on the buy side .

When contact person submits a new bid on the sell side, this is replicated to the buy side over the SupplierQuoteSRMRequest_In (namespace http://sap.com/xi/SRM/SE/Global ) XML interface.

The implementing class of this ESOA interface (/SAPSRM/CL_SRM_SUPPLIER_QUOTE) will call methods of class for quotation creation in SRM: /SAPSRM/CL_PDO_BO_QTE.

In the constructor method of this class, the role and the authorization of the contact person is checked.

Quotation documents can be created with 3 different roles:

The SUS contact person can have two of these roles: the Bidder role (B) or role Other (C).

Bidder role can only be assigned to user, that has a SU01 user in the SRM system. User with bidder role can create quotation on his own.

User, who does not have SU01 user in the SRM system (was created in the SUS system), has role 'Other'. User with this role is not allowed to create quotation document on his own.

However, the service user, which is processing the xml, can create a quotation on behalf of the contact person. However, this is only allowed, if the surrogate bidding is enabled for the bidder on the buy side.