If there are multiple graphics cards installed on your computer, scenes are rendered using renderers in the order of DirectX, OpenGL, and then Software Z-buffer.

Microsoft DirectX is a collection of application programming interfaces (APIs) for handling tasks related to multimedia, especially game programming and video, on Microsoft platforms. It provides a common interface between the OS and whatever hardware is installed in the PC.

In SAP Visual Enterprise Author DirectX---Renders the scene using the DirectX9.0 renderer (the best quality scene rendering), to the active viewport or a separate window depending on your selection in the Output tab.

OpenGL (Open Graphics Library) is a cross-language, multi-platform API for rendering 2D and 3D computer graphics. The API is typically used to interact with a GPU, to achieve hardware-accelerated rendering. OpenGL was developed by Silicon Graphics Inc. (SGI) in 1992[ and is widely used in CAD, virtual reality, scientific visualization, information visualization, flight simulation, and video games.

Note: If you have the OpenGL graphics driver installed on your computer, you can enable the 3D graphics acceleration card by selecting the OpenGL display renderer to boost rendering speed by three to five times.

In high-dynamic-range rendering (HDRR or HDR rendering), also known as high-dynamic-range lighting, is the rendering of computer graphics scenes by using lighting calculations done in a larger dynamic range. This allows preservation of details that may be lost due to limiting contrast ratios. Video games and computer-generated movies and special effects benefit from this as it creates more realistic scenes than with the more simplistic lighting models used.

In computer graphics, z-buffering, also known as depth buffering, is the management of image depth coordinates in three-dimensional (3-D) graphics, usually done in hardware, sometimes in software. It is one solution to the visibility problem, which is the problem of deciding which elements of a rendered scene are visible, and which are hidden.

When an object is rendered, the depth of a generated pixel (z coordinate) is stored in a buffer (the z-buffer or depth buffer). This buffer is usually arranged as a two-dimensional array (x-y) with one element for each screen pixel. If another object of the scene must be rendered in the same pixel, the method compares the two depths and overrides the current pixel if the object is closer to the observer. The chosen depth is then saved to the z-buffer, replacing the old one.

In SAP Visual Enterprise Author the Software Z-Buffer renders the scene using the Software Z-buffer renderer (an average quality render), to the active viewport or a separate window depending on your selection in the Output tab.

To change the display renderer, do one of the following:

Click Display > Display Renderer on the Navigation toolbar, and then click the display renderer that you require.

Click the name of the current renderer in the status bar on the bottom right corner of SAP Visual Enterprise Author and then click the renderer that you require. 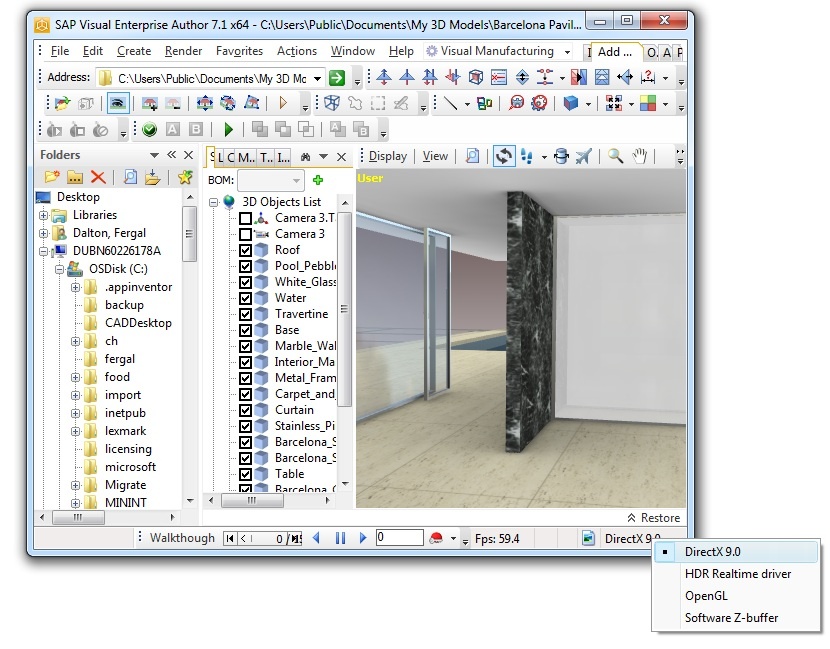