Looking for more information ?
The book "Single sign-on mit SAP" (http://sappress.de/2409) from SAP Press  gives a broad overview on sso scenarios for web service single sign on between Java, .Net and AS ABAP as well as browser based sceanrios.

To prevent loosing the information, single sign on between the web service consumer and web service provider is needed. In the past, vendors have implemented proprietary mechanisms like Windows integrated authentication, IBM LPTA tokens, SAP Logon Tickets or SAP Authentication Assertion Tickets, making service invocation using single sign technically challenging.  A solution to cross vendor single sign on is using the WS-* standards and SAML or X.509. SAML allows for a standardized exchange of security information related to users between servers over SOAP by using standard XML-based structures.

The basic entity of security information is known as 'assertion'. An assertion is a statement made by a trusted authority. Three types of assertion types are known:

SAP systems use the Authentication statement to identify the user issuing the request. Attribute and AuthorizationDecision statements are not supported.

SAML sender vouches is used for passing the user identity between two systems, i.e. between a portal and a backend system.

In the first step a user authenticates at a portal, and in step 2 the portal makes a call to the backend system stating user information in an SAML assertion. As there is a trust relationship between WS consumer on the portal and WS provider, the SAML assertion can be used for authentication.
SAML Sender-Vouches assumes direct trust between a web service consumer system and web service provider system. The consumer system confirms a subject in a SAML assertion (the sender vouches) and secures this information with an XML Signature over SOAP Body, SOAP Headers and the SAML assertion. More information is available in the documentation at http://help.sap.com/saphelp_nw70/helpdata/EN/47/2300de9a0b2debe10000000a1553f7/frameset.htm

Sender-Vouches is suited for system to system communications. It is not suited for passing identity from a desktop application like an office application to a backend system for the following reasons:

For such scenarios the SAML assertion is to be issued by a central authority, as described in the next section. 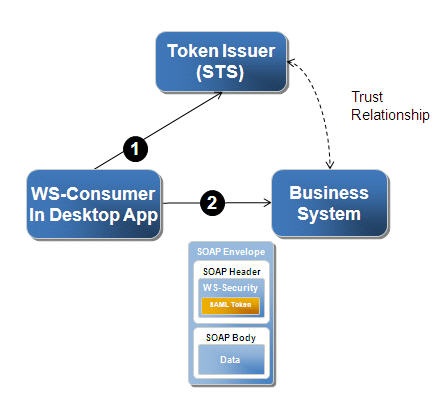 Think of a SAML Holder of Key token like a passport. Passports have the following characteristics:

Translating this to the XML-world it means:

In the WS-* world, SAML tokens are issued by a service called Security Token Service (STS). The STS is a distinguished web service as defined by the WS Trust specification that issues, exchanges and validates security tokens. As the STS is usually capable of accepting multiple types of tokens, it serves two purposes: