Byte Code Adapter does not start

After perform the Byte Code Adapter (ISAgent) Installation in the Managed System Configuration and restart the managed system, you noticed that the ISAgent didn't start. The node SAP Netweaver that should be created by this agent is missing for the target managed host in the Introscope Investigator (Workstation or webview). The following picture shows an example of the Introscope Investigator: 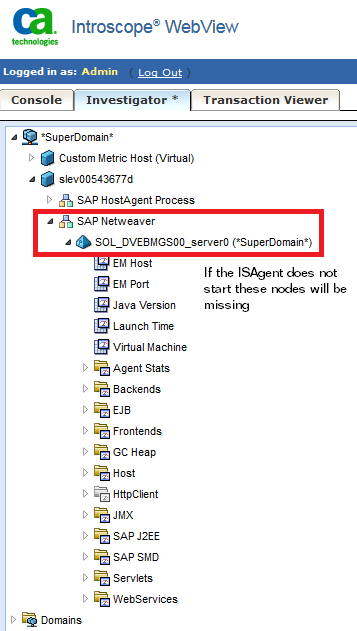 If the entries 'SAP Netweaver' + <SID_of_managed_system>_<instance>_<servernode> are NOT available in the invstigator, this means that the Byte Code Adapter (ISAgent) could not connect to the Enterprise Manager or it is not running. In this case, check the IntroscopeAgent.log that is usually located in the temp folder of the SMDAgent or managed system folder:

If the managed system runs on a UNIX server, ensure that the OS permissions are correctly configured as described in note 1163751. In most of the cases the Byte Code Adapter cannot start due to wrong permissions at OS level.  The easiest configuration to make it work is to give 775 (e.g: chmod 775) permissions to the Managed System OS user in the Byde Code Adapter folder.

It is possible to check the managed system startup files dev_server* and std_server* to search for issues related to the Byde Code Adapter: