The objective of this page is go provide knowledge to customers on how they can analyze its buffer issues in their system.

One of the most reported issues to SAP is red swaps in transaction ST02 as show in the Screenshot 1:

This page is part of:

Whenever you find that in your system, you should not simply increase all the buffers parameter values. The respective buffer should be carefully monitored in each case. Very often the reason for buffers running full are misbehaving applications (buffering objects that are too large or too many).

As soon as you start using your system, the buffer starts getting filled up. At some point in time, the buffer turns into displacement mode, i.e. each time a new object is to be loaded one (or more) other objects must be displaced before to free either a directory entry or data space for the new object. Since the displacement follows an LRU strategy it is assured that displacements hit only those objects that had not been accessed for a long time. On the other side, objects that are accessed frequently will stay in the buffer. For some buffers, "swaps" should be avoided completely, for others it's totally acceptable since "swapping" means displacement of old (recently unused) objects and reloading of newly accessed objects. This is simply the nature of a buffer.  There is one exception: the instances of the Nametab (NTAB) buffers must not swap at all. They should be configured large enough. If you are facing swaps in these buffers, please refer to SAP Note 1398802.

Regarding the other buffers, notice that the statistics in transaction ST02 (Screenshot 1) are cumulative, this means if you have 1000 swaps on Monday and on Tuesday you have +100, the transaction will display a total of 1100 swaps on Tuesday. To find out if your the corresponding buffer is correctly working in the system the analysis is conducted through transaction AL12 which is the buffer monitor for the application server you are currently logged in: 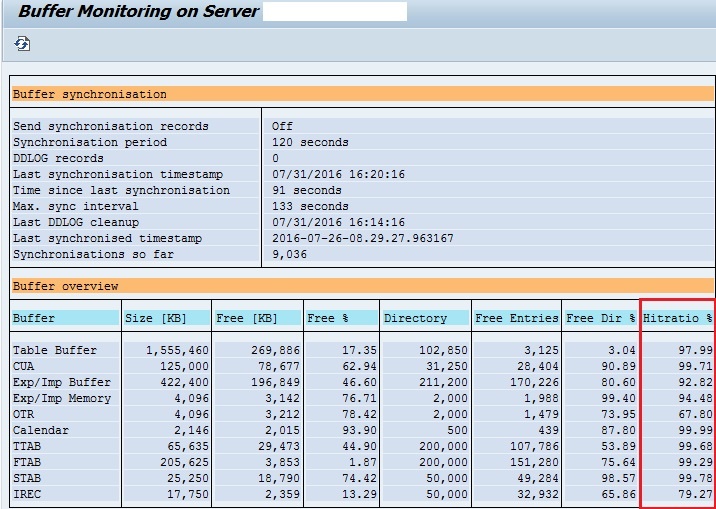 As shown in the image above, there is a column called "Hitration %", this hit ration is calculated by the number of access in the objects in the buffer, the higher the hit ration, the best. If you have a good hit ration in your system, even with high number of swaps being displayed in transaction ST02, your buffer is running fine and nothing need to be change. If the hit ration is not ok, report to SAP.