Partitioning in case of a flat dimension.

In BW we call it a flat dimension, if the SID table is directly joined to the Fact table. There is no dimension table. The same happens in BWA for this dimension: The SID index is directly joined against the fact index. Also, a normal BW dimension can get “flattened” in BWA: In this case the F-index directly contains the entries of (several) SID-indexes as keys. The below picture shows how to see this directly in the BWA: 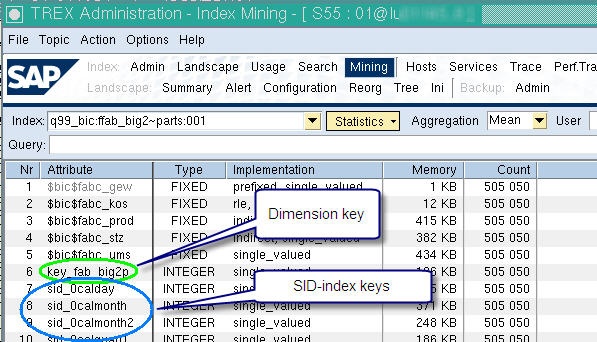 Screen shot from the TREXAdmin Standalone tool: One part of the fact index of Provider FAB_BIG2 is shown with attributes listed: We see a normal dimension key as attribute (green); it is the packet dimension FAB_BIG2P. We also see several flattened entries (blue). Values from SID indexes (here some time characteristics) are directly used as keys in the fact-index.

In such cases, the entry in table RSDDTREXADMIN (following note 1242217) should be different: It has to refer to the SID table rather than to the dimension. The exact entry is available in the (flat) dimension table. In the shown example: The fact-index of InfoProvider FAB_BIG2 has a flat dimension entry for characteristic 0CALDAY in it. Now the line in table RSDDTREXADMIN should be: Object = PARTATTR_/BIC/FFAB_BIG2 and Value = SID_0CALDAY.

In case of doubt, whether such a partitioning is useful, please refer to point 4 of the guidelines: Simply run a test with this setting, using the most important queries. Keep the settings if the performance improves.