Experiences with Streaming at SAP Inside Track in Hamburg

Since streaming became a more and more common feature of SAP Inside Tracks, we at sitHH this year (in November 2019) also decided to record our sessions and stream them to the internet.

As I attended to both Inside Tracks in Essen (sitPott) and Berlin, I had the chance to learn from Gregor’s and Oliver’s setups. Also Oliver presented an session dedicated to recording and streaming at Inside Tracks and how it works at sitPott.

So, well prepared I started my experience with streaming on a comfy level, where I quickly learned, that the tricky parts are the details.

As a hobby photographer, I initially tried to connect my Canon EOS 6D to my computer. First I wanted to connect it via USB to the computer, just to find out, that I don’t get the signal out of the Canon software (screen scraping works, but hmm...). The camera has also an HDMI output, which I could grab with the so called Camera Live software (to be found at https://github.com/v002/v002-Camera-Live, macOS only), just to find out, that the HDMI signal is poor with this particular camera model and even more worse, after updating my laptop to Catalina macOS 10.15 the software became incompatible. After buying a lot of cables and spending even more time with software problems, I decided to fall back to a simple HD webcam. The final spending on this video stuff was a Logitech C922 pro Webcam with USB connector, which the setup in the end successfully went live with.

Computers usually have an HDMI out connector, but are not capable of recording HDMI signals. You need an extra recording device for that. In Oliver’s setup he uses a Blackmagic Design UltraStudio Mini Recorder, which has an HDMI in socket, but only a Thunderbold 3 connector to the computer. As these recorders are quite expensive (around €150+) and my two laptops, a MacBook Pro and a Lenovo T480s only have USB-C or USB sockets, I was looking for USB devices (you may use an adapter, which I did not want to). Eventually I found the Elgato Game Capture HD60S recorder. One plus factor with this recorder: the HDMI splitter is already built in. So it contains of one HDMI-in (from the presenter’s laptop), one HDMI-out (to the projector for the audience) and an USB connector (to the recording laptop).

The rest of the setup was very similar to the one, that Gregor recommends. My director’s stand (so to say) was also the freely downloadable Online Broadcaster Software (OBS). Elgato officially supports OBS. I started their game capture software, which established the connection to the device (you also do adjustments there, like frame rate and others). After this, the device could be selected within OBS and was ready to use.

On location, we couldn’t connect to the audio system to grab the signal, as the equipment was built in in a 19” rack and we couldn’t manage to reach the cables. Here we had to use the microphone of the webcam, which showed to be fairly okay.

Afterwards I realized, it would have been much more risky to record the sound through a microphone, as you don’t have any syncing issues with that webcam with built in sound combination.

The final setup during the Event

What I did in preparation, was:

Something I also learned:

I hope, this gets you an idea of how we managed our streaming challenge and encourages you, to stream your SAP Inside Track the next time as well. 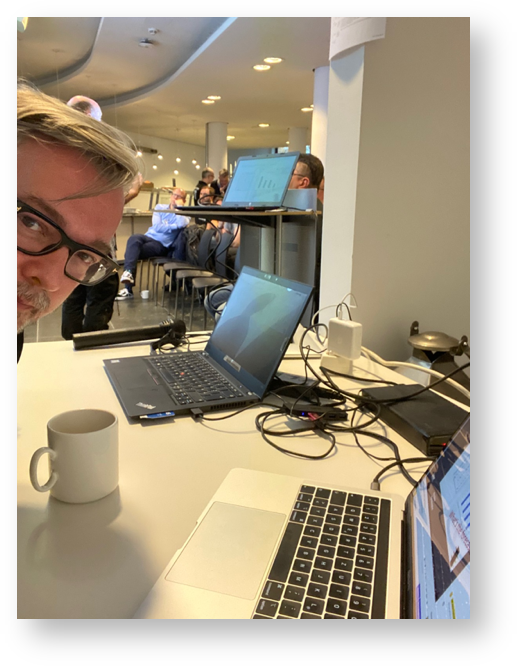 Me in Hamburg during the Event