This page is part of:

The "number of copies" field is displayed in the SAP print dialogs (ABAP lists, SAPscripts, Smart Forms).
Entering "2" means that an original and a copy are printed. It doesn't mean that it prints 1 original and 2 copies.

It is also possible to default the number of copies by program, with and without displaying the print dialog:

It is possible to enter a maximum of 255 copies (upper limit of the field in spool table). If you need more, print the spool again.

Using SAPLPD, if the printer selection dialog is displayed, the number of copies is shown (but it cannot be modified directly, you first have to select another printer, and then it is modifiable).
If several copies are requested, SAPLPD will aggregate the print stream as many times as there are copies, and send this aggregated stream to the printer once.

For other output devices, SAP sends the command as many times as there are copies. 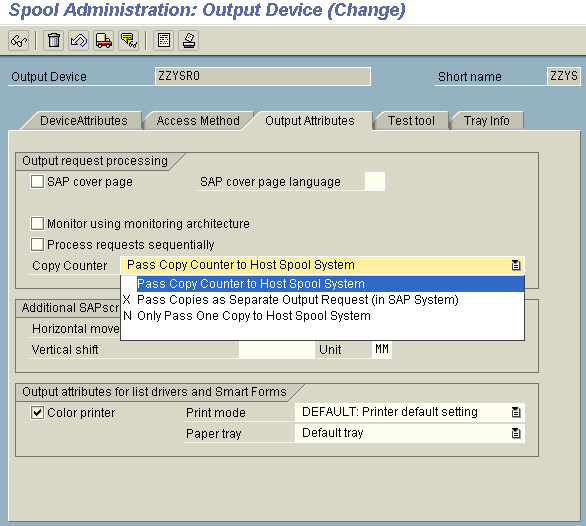 Copy Counter option may be one of the following:

Note: the copy counter option is ignored when printing a smart form containing a Copies window, because the OTF driver generates one spool made of all the copies, so SAP always transmit one copy to the output device.

This option is available only in the Smart Forms print dialog. 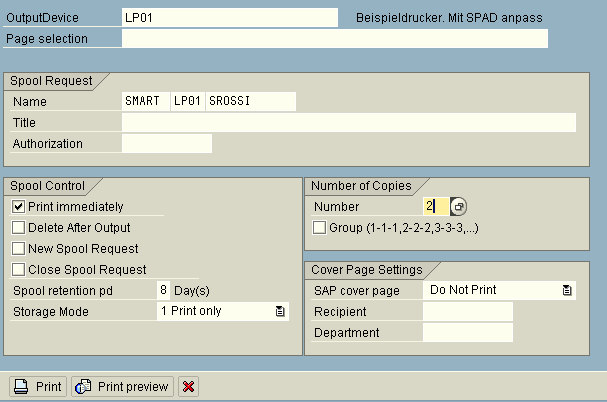 Remark: SAP Note 1158640 may let think incorrectly that, when Smart Forms are printed, original and copies are merged into one print stream. This is wrong as explained above (it happens only when the Smart Form contains a Copies window).

1 copy is printed instead of several requested?

N*N copies are printed instead of N copies?

The "Copy window" in Smart Forms

This window type is used to output data either on original, or on copies, or both.

Using such a window means that SAP will generate one print stream containing the original and all the copies, and will tell the output device to print only one copy (the Copy Counter option of the output device is overridden with value "Only Pass One Copy to Host Spool System") as everything is provided in the print stream.