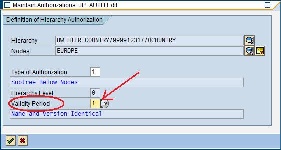 The first part (the node name) is always fixed. You can set the second part (for which hierarchy you want the authorization to be valid) by specifying the validity.

Of course, in two different hierarchies, two nodes with the same name may be completely different.

A hierarchy node-selection has a comparable structure. It specifies:

This specification of the selection is always fixed by the selected data query.

How is a check carried out, in particular, if the validity is not unique?

For validity = 0, the situation is simple:
In the selection, the following is defined precisely: Node name (with drilldown depth) and hierarchy (name, version, key date). This is now compared with all the hierarchy authorizations of the user in order:

For validity = 1, 2 or 3, the logic is rather more complicated:
The selection is still fixed precisely: Node name (with drilldown depth) and hierarchy (name, version, key date). This cannot change.

Note 2: A "reverse logic", that is, using the hierarchy from the authorization could be considered in principle: However, then the system would have to first search for all hierarchies that correspond to a hierarchy authorization with open validity (1, 2 or 3). Then, in all of these hierarchies, the system would have had to check whether the selected node was under the authorized node. This logic would not be feasible because it would lead to serious performance problems in some cases.

Note 3: As in note 2, another logic could also be considered here: If the validity is variable (1, 2 or 3), the system could first search for all "suitable" hierarchies and then evaluate them all.
This logic could not be used because it would lead to serious performance problems in some cases.

If you want a single value to be selected in a query with a hierarchy, you can select the relevant leaf in the hierarchy. In the display of the executed query, a distinction is not made between a selected single value (flat selection) and a leaf selection. The data displayed is the same. However, from a technical point of view, there is a difference: the leaf selection contains complete hierarchy information, however the single value selection does not.
If a leaf is selected in a query, for example, using a node variable, the check is carried out as follows:

Note 4: A possible consequence of this logic is that the system may display all the leaves of a node, for example. However, the selection of the directly superior node returns "No Authorization". It is also possible that out of two different queries that should display the same characteristic value, only one may be authorized. It is up to the administrator to set up the queries and/or authorizations so that the authorizations correspond to the query design. For this, the logic described must be known and relevant tests must be carried out.

Here is a detailed example of how the logic of the extended validity works:

The values of a "customer"- characteristic are located in different parts of the world-hierarchy "WORLDHIER". "WORLDHIER" is a geographical hierarchy that groups the customers by countries. The hierarchy has two versions.
In version 1, the customer "Jones" belongs to USA: 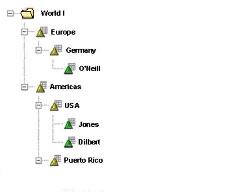 In version 2, the customer "Jones" belongs to Puerto Rico: 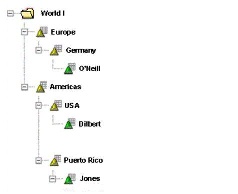 The following hierarchy authorization was defined:

o  Validity: 2 (= "Name identical") The version is therefore not
defined.

The following hierarchy node is selected in a query:

This query selection is checked successfully. Data is displayed.

Reason:
First the authorization is not rejected because it is classified as "suitable" under the validity 2 (name identical). Therefore, the node "USA" contains an authorization. Then the system checks whether the node "Jones" (which is actually a leaf) is in the hierarchy version 1 under the authorized nodes. If it does, the selection is authorized.

Please note again: In this case the hierarchy structure of the selection is taken when determing the authorized area of the user. Therefore only the node-name maintained in the hierarchy-authorization is relevant.

In a query, "Jones" is selected as a single value (no hierarchy). This query returns "No authorization".

Note 4: The comparison with test case 2.2 shows that, for the same hierarchy authorization, the display of a value (here: "Jones") may depend on the query definition. In one case, the flexible validity (= 2) has an affect, in the other case it does not.