Help you to understand the different SAP memory management implementations available in the SAP system.

This page contains information about the SAP memory management implementations and their differences, demonstrating the relevant parameters for each one of them.

The "map" memory implementation causes the activation of a significantly simplified method for configuring memory management. This implementation is recommended for 32-bit Linux operating systems as described in detail in SAP Note 386605.

In this memory implementation strategy, only the currently active user context is mapped to the address space of the work process. This is considered a classic model where a roll-in corresponds to mapping a context in the extended memory, and a roll-out corresponds to unmapping this context. The below image shows an example of this process. 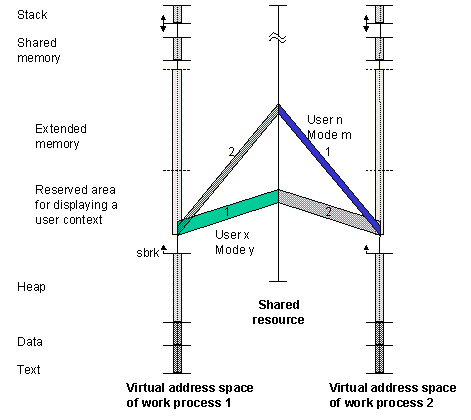 em/initial_size_MB - This parameter specifies how much SAP extended memory is available on the SAP system.

em/address_space_MB - Quantity of Extended Memory that each single user context may fully occupy provided ztta/roll_extension has not yet been reached; this interval is reserved from the start of the instance.

The memory implementations "STD" and "flat" represent the same strategy, however, as highlighted in the above image, the "STD" implementation is used in Linux and Unix systems, while "flat" is valid only for Windows.

The roll-in, in this memory implementantion strategy, means removing the protection from a user context in the extended memory and roll-out means protecting a context again. The advantage of this memory model is the reduced number of soft page faults, because the process working set is stable. The disadvantage is the overhead of the memory protection, which results in higher kernel-mode CPU usage.

em/initial_size_MB - This parameter specifies how much SAP extended memory is available on the SAP system.

es/max_seg_size_MB - Specifies the maximum size of an extended memory segment in the SAP system.

es/max_segments - Specifies the number of extended memory segments in the SAP system. 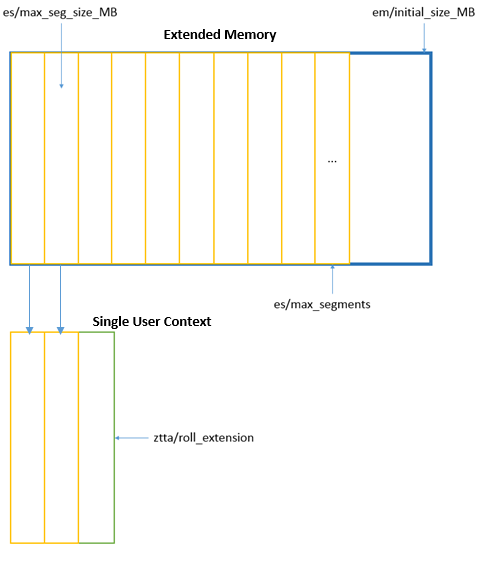 The parameter ES/TABLE determines the function table used to provide ES functionality. There are two ES/TABLE implementations available. These are UNIX_STD, which is the default, and SHM_SEGS. At present only AIX supports the SHM_SEGS implementation.

EM/TOTAL_SIZE_MB - This parameter specifies how much SAP extended memory is available on the SAP system.

ES/SHM_SEG_SIZE - Size of the AIX system segments (in megabytes)

ES/SHM_PROC_SEG_COUNT - Specifies the number of shared memory segments that are used as shared and privately.

ES/SHM_MAX_SHARED_SEGS - Specifies the number of shared memory segments that are used privately.

ES/SHM_USER_COUNT - The maximum number of users in all open sessions.

Implementing the Extended Memory on Windows

Implementing the Extended Memory Under UNIX

Release of SAP Memory for the Operating System

(Use the following Hyperlink with SAP Note/KBA number at end: https://service.sap.com/sap/support/notes/123456)